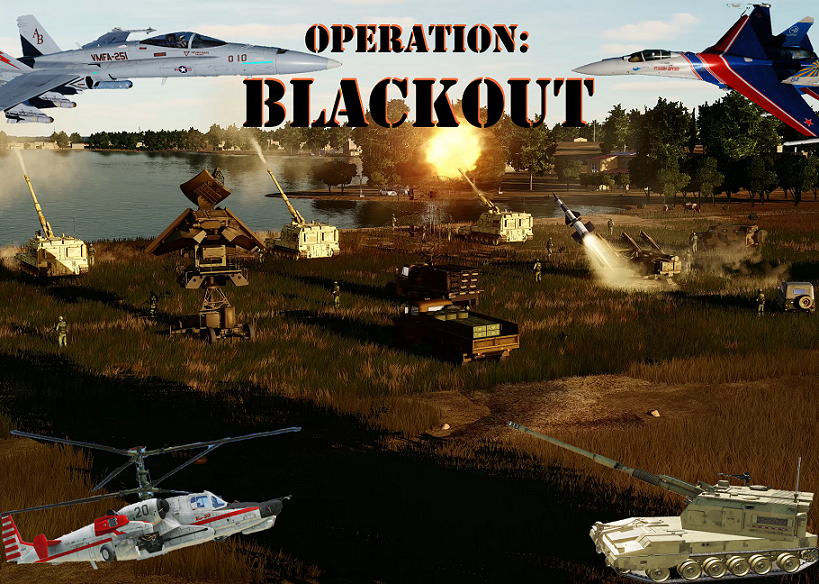 Тип файла - Одиночная миссия
Загрузил - GazAce
Hey there awesome DCS Brothers & Sisters, hope all is well. This is my latest mission & should take you around 90 mins or maybe less & I difficulty rate this one about 8.5. There a few different ways to fly this & naturally other AC can be used in this Sortie also. I hope you enjoy it. Regards GA :-)
Dawn 05:45 Jirah Airfield. You're resting & enjoying well deserved R n R after some intense ORT exercises (Operational Readiness Training). Just then your peace & quiet was broken by an alarming report that came in of a small enemy camp consisting of three enemy Howitzers & other units that have positioned themselves on the Euphrates River in Raqqa at the foot of a large road bridge. They're sitting East of the Euphrates River Weir Dam & its large Electricity Plant & at this very moment bombarding both the plant & the dam. Also at this camp is a SAM SA-3 Array & an enemy Ka-50 has been seen orbiting the area. If that's not enough...
Go here for a full fly-through on my YT Ch https://youtu.be/iXvOH4TX1aI
Теги: F/A 18-C HORNET, SOLO MISSION, HOWITZERS, SA-3 SAM, PRECISE LAT LONG COORDINATES, MOVING TARGETS, SYRIA MAP, FLANKER, KA-50, KNEEBOARD
Скачать Подробнее
DCS: World 2.7
F/A-18C Hornet

Тип файла - Одиночная миссия
Загрузил - GazAce
07:00 Mariana Islands & the weather is good. CVN-71 Theodore Roosevelt is 30 miles ahead & the Marshal is awaiting your Inbound call. Also, Tanker Shell is on station close by & will gladly receive you for a AAR if you wish to practice that procedure. There are no threats in this area.
This is a early vid of when I was starting out my Case I Recovery Traps but it could be useful for you...
https://youtu.be/i8-IZ5-J1Z0
Теги: CASE I RECOVERY, HORNET, CVN-71, TACAN NAVIGATION, AAR, MARIANAS, F14, SUPER CARRIER, AIR TO AIR REFUEL, CALL THE BALL
Скачать Подробнее
DCS: World 2.7
F-16C Viper 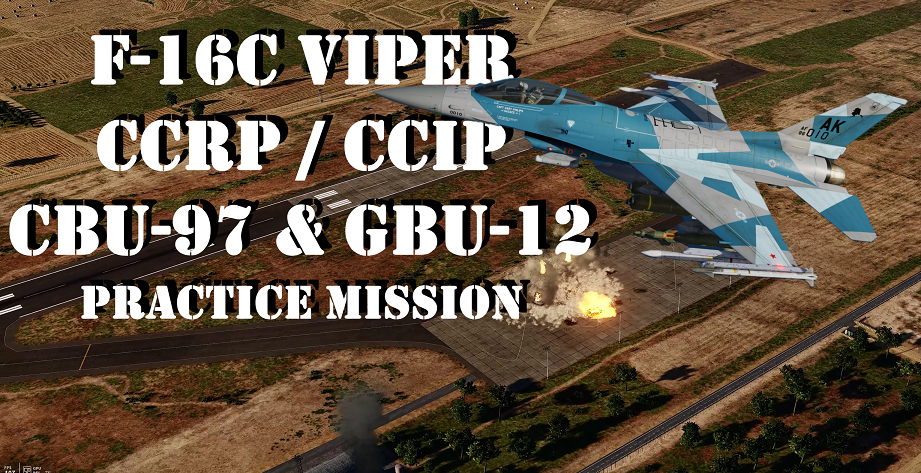 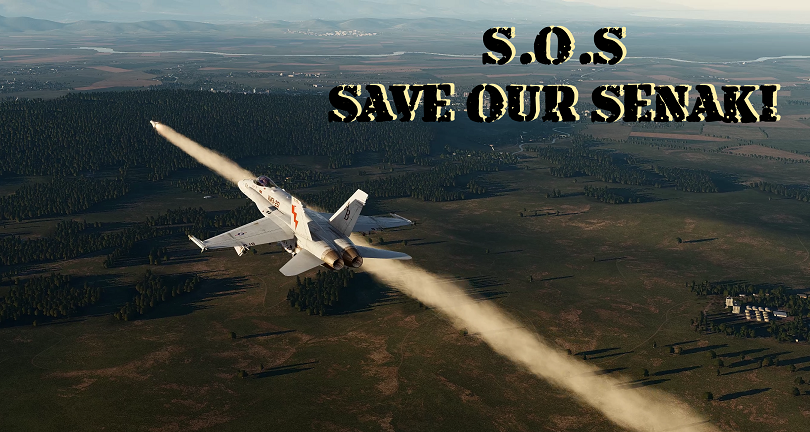 Тип файла - Одиночная миссия
Загрузил - GazAce
Hey good people, this is no quick mission, it's in two parts divided by a rearm & refuel & will probably take you around two hours. Naturally, you may fly any of the AC that are able to depart & return to Supercarrier. 06:00 Black Sea Caucasus, just off the coast of Batumi. Chevy 1-1 in your Pit aboard CVN-73 George Washington. Our Predator has ID a build up of enemy forces a few miles East of Senaki-Kolkhi & our Intel has sent word that two Akatsia artillery Howitzers there are planning to bombard Senaki Airfield. The group consists of a SAM SA-6 array with four Launchers, patrolling & stationary armour, AAA S-60 & the Howitzers & including quite a number of infantry. We also obtained reports that a Barracks half a mile to the Nth East is storing weapons & equipment & also an enemy Black Shark has been spotted orbiting the entire area. More info in mission & Briefing included within your Kneeboard.
Condensed flythrough posted on my YT ch https://youtu.be/ct9MpJO0I0w
Теги: Supercarrier, FA-18C HORNET, F-14 Tomcat, AV-8B Harrier, Harm missiles, ground attack, rearm, Refuel, MK-83 iron, maverick missiles, MGRS, CAUCASES MAP, kneeboards
Скачать Подробнее
DCS: World 2.7
F/A-18C Hornet 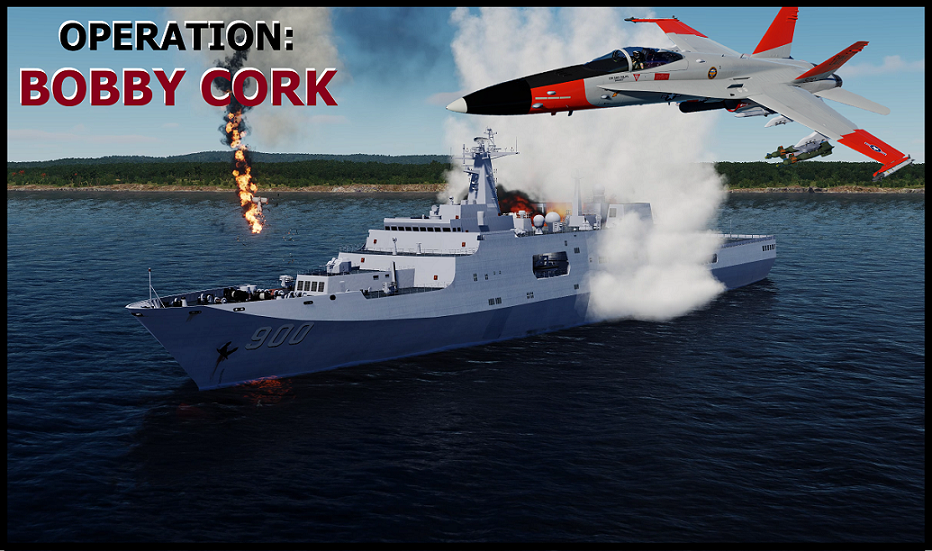 Тип файла - Одиночная миссия
Загрузил - GazAce
Hey there DCS Brothers & Sisters. This mission should take you around 75 mins incl a refuel & I would difficulty rate this 8/10. I hope you like this one & report any issues in the comments below. Have fun & good luck. 10:00 MARIANAS ISLANDS. YOUR IN YOUR PIT ABOARD CVN-72 USS ABRAHAM LINCOLN & ABOUT TO COMMENCE START UP. THERE'S A SENSE OF ELECTRICITY MIXED WITH TREPIDATION HANGING IN THE AIR. WE ALL KNOW THE SITUATION IS TENSE & VOLATILE. THE ISLANDS HAVE RECENTLY BEEN DIVIDED & WE ARE KEEPING A CLOSE WATCH FOR ANY ACTIVITY THAT MAY WARRANT ACTION. IT NOW LOOKS LIKE THAT ACTION HAS ARRIVED.. WHETHER WE WANTED IT OR NOT. AWACS "MAGIC" HAS SPOTTED A SMALL GROUP OF VESSELS CONSISTING OF A LARGE ARMED LOADING DOCK ALONG WITH OTHER SMALLER ARMED BOATS ANCHORED OFF THE ISLAND OF SAIPAN.
For a heads up, a full condensed flythrough I posted to my YT Ch  --> https://youtu.be/fRXvJFa-UDE
Теги: Hornet Case I, MAVERICK AGM-65E, MAVERICK AGM-65F, Mariana Islands, CCIP DELIVERY, close air COMBAT, Cold Start
Скачать Подробнее
DCS: World 2.7
F/A-18C Hornet 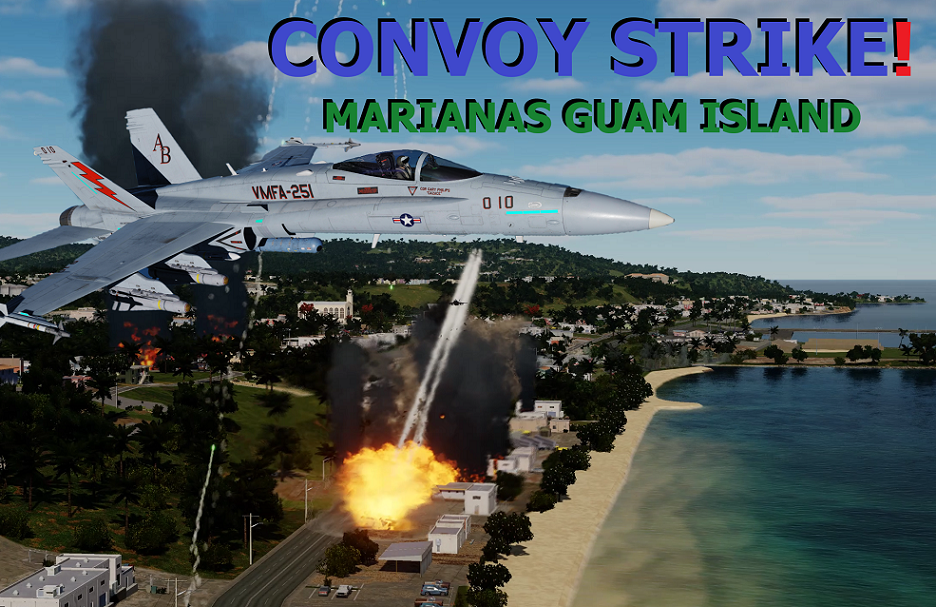 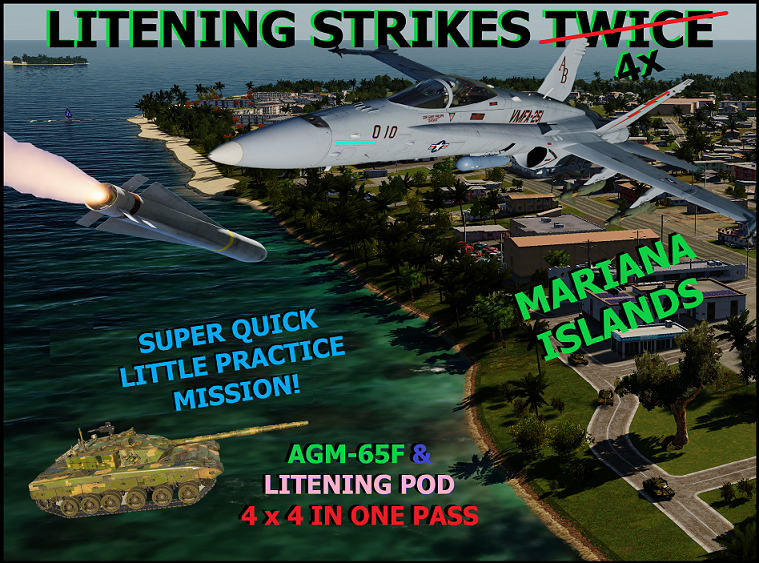 Тип файла - Одиночная миссия
Загрузил - GazAce
Hey there DCS Brothers & Sisters, hope all is well.
A quick & fun no pushover little practice mission racing against the clock. Try & nail 4 mobile enemy Tanks before they reach their Checkpoint in one pass using your Litening Pod & Mav Seeker with 4 x AGM-65F Mavericks. I've also made the AGM-65E Mavs & ATFLIR Pod available if you wish to change your Loadout but all other ordnance are restricted. Your also carrying some sticks in case any air threats present themselves.. which is quite likely & some kneeboard info is also available. Mission difficulty I would rate this one around 7- 8/10 & can be easily completed in under 20 mins incl RTB landing.
Теги: HORNET F/A-18C, MARIANAS ISLANDS, AGM-65F MAVERICK, LITENING POD, MOVING TARGETS, TIME CONSTRAINT MISSION, AIRFIELD LANDING, AIR START MISSION, AIR TO AIR COMBAT
Скачать Подробнее
DCS: World 2.7
F/A-18C Hornet 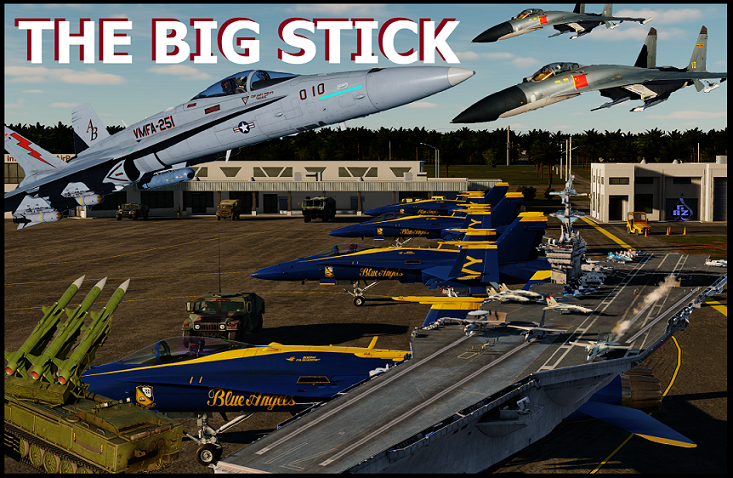 Тип файла - Одиночная миссия
Загрузил - GazAce
7:00 Guam Mariana Islands. Supercarrier CVN-71 Theodore Roosevelt aka "The Big Stick". You're heading North from Hagatna Bay to the Philippine Sea & have received information concerning a situation developing in the Northern Mariana Island of Saipan. Our Predator has sent back images of an enemy Militia group that have infiltrated & taken over the Airport. They have AAA units set up & also a small armoured group has been observed patrolling the area. It's reported that embedded within this group are trucks transporting weapons & equipment to a Transport plane they have commandeered. Now, coinciding with this & more of a concern is that our AWACS has reported two enemy Su-27 Flankers snooping around Rota Island & are fully loaded with Air to Air & Air to Ground ordnance. We're very concerned about this as our Blue Angels team is on the ground at Rota at the moment undergoing maintenance. More information in the Briefing & your Kneeboard
Теги: FA18C HORNET, MARIANAS MAP, SINGLE PLAYER MISSION, SUPERCARRIER, THEODORE ROOSEVELT AIRCRAFT CARRIER, BOMBING MISSION, SU27 FLANKER, SAM SA6, AAA, AAR, MOVING TARGETS, CARRIER LANDING, SHORE LANDING, JTAC, AIR TO AIR MISSILES, KNEEBOARD
Скачать Подробнее
DCS: World 2.7
F/A-18C Hornet 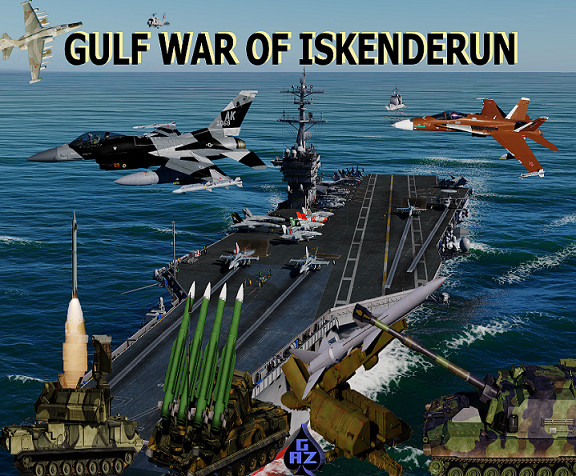 Тип файла - Одиночная миссия
Загрузил - GazAce
Hey awesome DCS Pilots. This is my biggest mission to date & I'm very happy to share it with you. It could take you up to two hours or more & can play out differently each time you fly it depending on what your allied Strike Package group accomplishes. There's a bit of everything in this, even some bridge bombing. I do hope you enjoy this one, so go get em & have fun. Cheers GA :-)
16:00 Mediterranean Sea, aboard Supercarrier CVN-72 Abraham Lincoln aka "Black Pearl" heading Nth engaged in Training exercises off the coast of Latakia. Intel provided details of an alarming situation of Militia forces attacking the Port Cities of Karsi & Sariseki & Iskenderun. You will be provided with MGRS Coordinates, which you will convert to as your Waypoints so to identify & subsequently take out all designated targets. (more info in your kneeboard)
I posted a condensed fly though on my YT ch if you care to check it out for any tips https://youtu.be/9G7RvJBxEus
Теги: FA-18C HORNET, SYRIA MAP, single mission, GBU12, GBU38, laser guided bombing, Supercarrier, ARTILLERY BOMBING, SA-11, SA-2, RAPIER SAM, SA-15, AWACS, AAR
Скачать Подробнее
DCS: World 2.7
F/A-18C Hornet 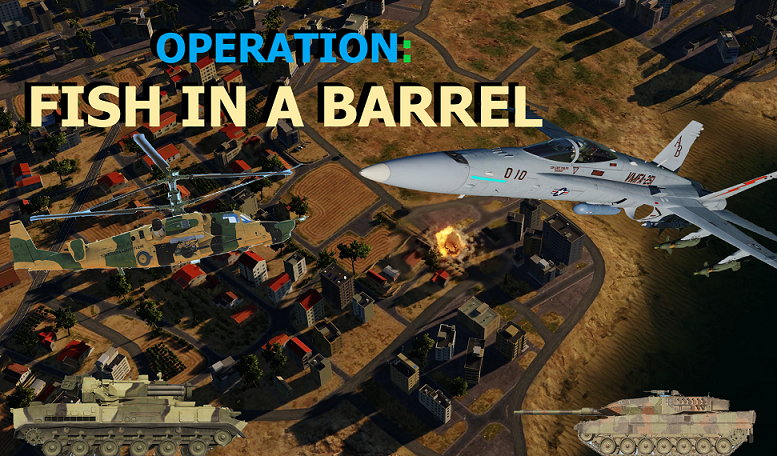 FISH IN A BARREL

Тип файла - Одиночная миссия
Загрузил - GazAce
Hey awesome Pilots. This mission shouldn't be too much trouble for you & there's some good opportunities for GBU & MAV to moving Targets & CCIP delivery too & also a AAR if you wish. It's not a long mission & I would difficulty rate this one a 7/10. Oh, take care around the Tunguska & the Ka-50 Black Sharks.
I hope you enjoy, GA ;o)
SITUATION:
18:00 TURKISH OCCUPIED NORTHERN CYPRUS. A SEVEN UNIT ENEMY COLUMN IS HEADING WEST TO A KYRENIAN PORT & EMBEDDED WITHIN THIS COLUMN ARE FOUR ARMOURED UNITS. THE TURKISH GOVT IS TURNING A BLIND EYE TO THIS & OUR INTEL SUGGESTS THE COLUMN WILL LINK UP WITH OTHER ENEMY UNITS AT WP-7 & THEN MOVE SOUTH ACROSS THE BORDER. THIS MUST NOT HAPPEN
Теги: FA18C, ROCKEYE Mk-20, CYPRUS MAP, GBU-12 DELIVERY TO MOVING TARGETS, ATFLIR, MAVERICK AGM-65E, LOADOUTS, LANDING, AAR
Скачать Подробнее
Пред. 1 2 3 4 След.  ctrl→
ПРИСОЕДИНЯЙТЕСЬ К НАМ