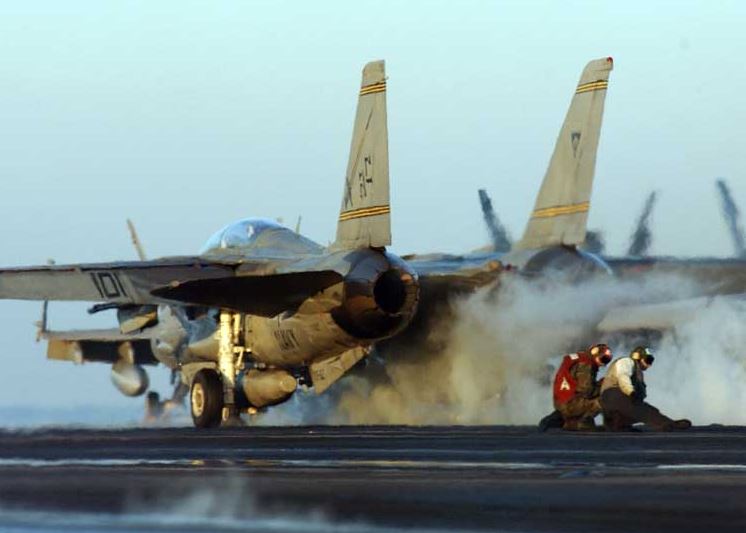 CVN-75 is currently on station north of Alexandria, Egypt.
Turkey, Israel, Jordan and Syria have denied airspace use for Operation Iraqi Freedom missions. CNO had directed that the Med carrier groups will have to return home if they cannot contribute to the ATO for OIF.
This left the Tomcats of VF32, Prowlers of VAQ 130, Hornets of VFA 37,105 and VMFA 115 no choice but to route down the Sinai Peninsula, across the Gulf of Aqaba then  enter Saudi Arabian airspace south of the Jordanian border, continue through Saudi Arabia and on to Iraq and targets in Baghdad.  These events are detailed in "Tanker Pilot" by Mark Hasara (LCol. USAF ret), in the chapter "Cyrus Crosses  the Sinai". Naturally tanker support was critical for mission success. Take on the role of Capt. Mark "Cyrus" Vance, CAG of CVW3 to plan and execute a mission to take out the Baghdad AD Command Center

FRAGO
CVW3 is tasked to carry out a strike to destroy CCC in Baghdad
The main target is a command bunker, secondary is the EW Radar site located close by.
Reported SAM and AAA threats once inside Iraq and near the target


(Add flights as you see fit)

CVN-68 is on station in the Red Sea to act as emergency divert
TACAN 74X, ICLS 11
CVN68 Recovery tanker overhead on TACAN 68Y

NOTES:
This small mission template demonstrates how much unused space is actually available in the DCS world. Of course there are no map objects out there, but you can navigate reasonably well with the satellite textured terrain. I've found the Syria map extends west out to the Libyan coastline, south past the Red Sea and east almost to the Persian Gulf! Hopefully this can get some interest in modding up some things (airfields!) to populate.
As this mission takes place "outside the lines" of the populated DCS map, I had to find a way to make a divert field available.  I was able to situate the Stennis in the "Red Sea", which is depicted well visually but is not water, so the ship is stationary. However, it is fully functional  with working Airboss, overhead tanker, E2 and a CSAR helo. One could even use this for Desert Storm scenarios...
As we all know now, the MiG threat was nonexistent in the 2003 conflict. Yet during Operation Desert Storm, Northern/Sothern Watch there were numerous encounters. So to get a little of the apprehension, I've added a MiG group with a small remote chance of being enabled. It is possible a MiG 2 ship may appear around Baghdad with a ROE of Weapons Free and a direct route to the border.  How/if they will react, I have no idea.

You will need Supercarrier for the Truman, Tomcat or Hornet (either or both)  modules and EA-6B (mod available here in Mods forum)

CVN68 livery for the Stennis:
(https://www.digitalcombatsimulator.com/upload/iblock/289/Nimitz%20class%20libery.zip)

Feel free to use this any way you see fit, I've added in the borders for Operation Northern Watch, targets in Mosul, Kirkuk, the H3 airfield, a carrier in the "Red Sea",  refueling tanker in Saudi, plus EWR, AAA and SAMs in Baghdad.  Save as a static template to include in mission building, etc
Теги: Tomcat, Iraq, Syria, Hornet, Supercarrier
ПРИСОЕДИНЯЙТЕСЬ К НАМ