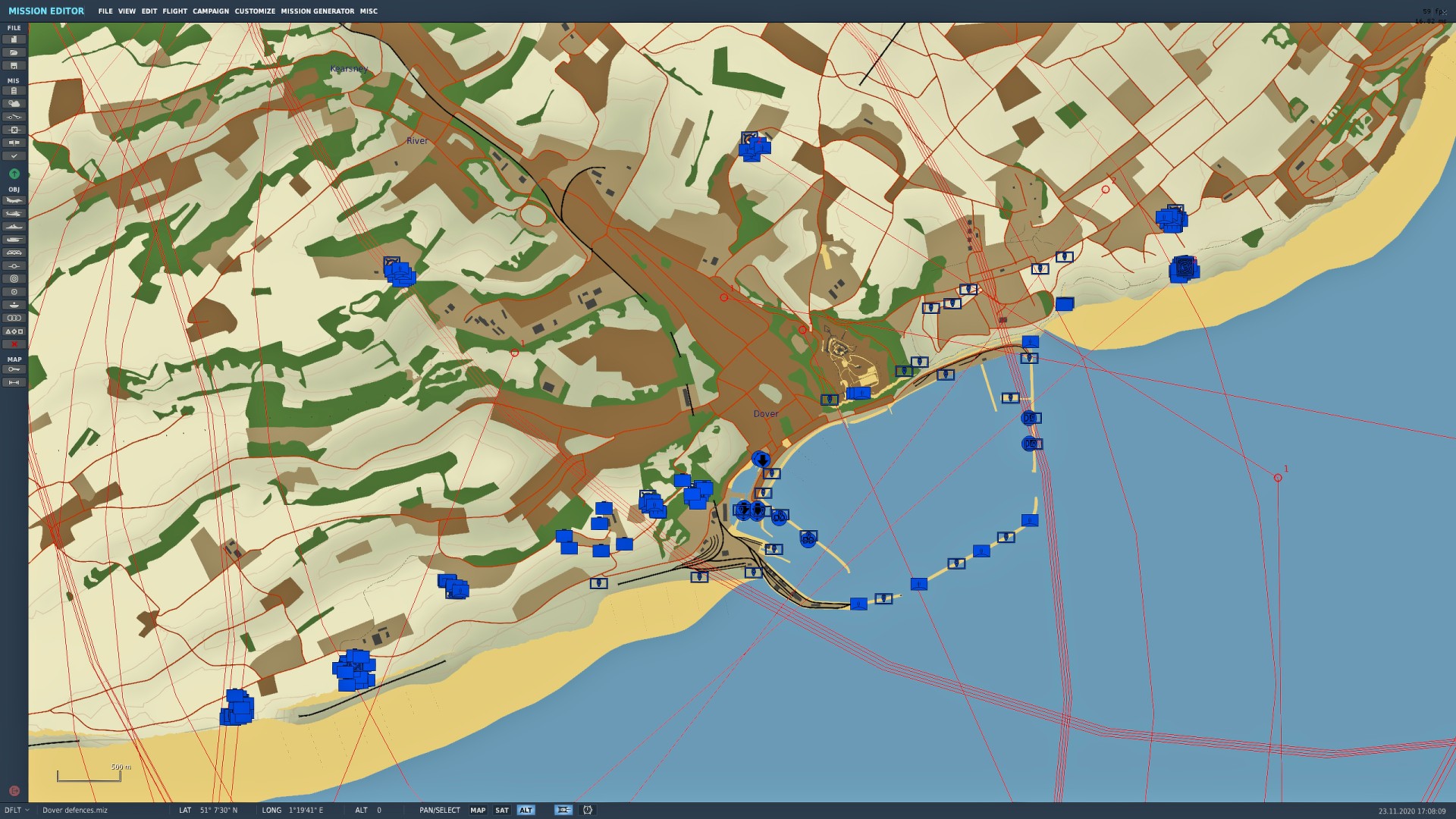 I created this mission template to use it as a starting point for other missions by placing as many of the historically deployed Heavy AA batteries around Dover as possible. While the focus started with Dover, I have now added other sites in Kent.

Please note that you need to edit this mission to make it playable. There are some German fighters and bombers included but they are there to show how the defences react (it's quite fun to watch them fly in and get shot at).

V0.1 23/11/2020 included:
Heavy Anti-Aircraft (HAA) sites in the Dover area are placed using historical records. I estimate about 80-90% accuracy. You may find that some of the sites were there in 1940 but perhaps not in 1944, and some guns were moved around - the records can be unclear. But I think the overall end result is pretty representative. Numbers per site are accurate where records were available.

Light Anti-Aircraft (LAA) sites are also placed using historical records. I have included about 60% of the LAA sites.

Barrage balloons - I have included the exact number of balloons as deployed in 1940 but have not been able to find exactly where they were. I have tried to place them in suitable locations. Also, it is not possible to match the heights they were deployed at as no records exist that I can find. The max is 1500m as per standard doctrine and some are lower.

Naval batteries - I have placed most of the major coastal gun batteries and used historical records and satellite photos to place supporting buildings. Since ED have not provided a coastal gun model I have had to use a bunker style building to represent the position.

Ships - totally made up.

Pillboxes - where records show pillbox defences, such as around the Citadel, these have been placed.

v0.2 24/11/2020
Includes:
Additional HAA sites at Hythe, Folkestone, Deal, Manston. All placed using OS grid references fr om historical records so should be very accurate.
All Allied airfields have LAA defences - these are not historically placed on the airfield and I've chosen 3 guns as a starting point.
LAA defences added to ports (Dover already had them).
Additional ships / boats at Ramsgate, Folkestone, Eastbourne, Chatham.
Barrage balloons added to ports (Dover already had them). Not historically accurate due to lacking records.
Cows! Cows have been placed wh ere one might expect to find cows. They seem unusually unbothered by high velocity AA fire.

I hope you find this useful. I welcome any comments and suggestions for improvement. If you use it please let me know on the forum here:
https://forums.eagle.ru/forum/english/digital-combat-simulator/dlc-maps/dcs-the-channel/missions-and-campaigns-aj/7150531-dover-defences
Теги: the channel map, ww2 assets pack
ПРИСОЕДИНЯЙТЕСЬ К НАМ