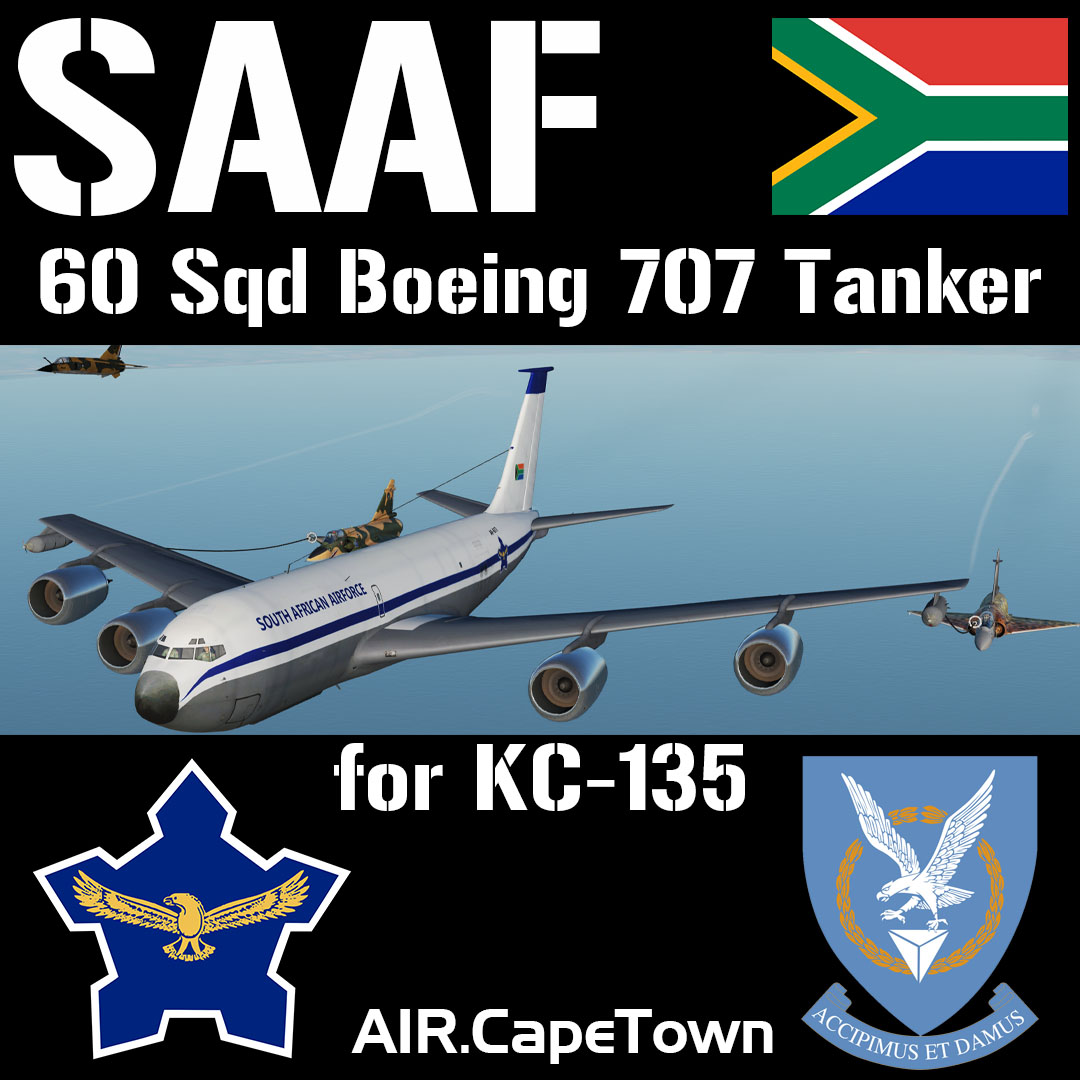 This Livery for the KC-135MPRS was done last year for a Cinematic that ZANDF is currently working on.

Decided to release it to the public, just in case anyone else would like to pretend their KC-135's are in fact the Boeing 707's used by the South African Airforce's 60 Squadron.
__

The aquisition of three Boeing 707's in March 1982 was the result of a ten year project undertaken to provide the SAAF with a dedicated air-to-air refuelling capability and it fell upon 60 Squadron to undertake this responsibility when the unit was reformed at AFB Waterkloof on 16 July 1986. The fleet grew to five aircraft with the acquisition of two more Boeings in 1990 and 1992 respectively. An electronic warfare and early warning capability was added to the unit's primary responsibility.

The squadron provided a highly effective force multiplier to the Buccaneers of 24 Squadron, 1 Squadron's Mirage F1AZ's, Cheetah E's of 5 squadron and continued to do so for 2 Squadron's Cheetah C and D variants.

With the reduction of a potential threat against South Africa, 60 Squadrons duties were expanded to include both a transport and a humanitarian role. In recent times the Boeing 707's of 60 Squadron have become well known to South African troops on peace support missions in Africa. The boeing's range has also made it effective in patrolling South Africa's maritime resources with flights as far south as Marion Island and Antartica. The squadron's contribution was rewarded with the awarding of it's Colours during a parade at AFB Waterkloof on 7 October 1994.

The Squadron were active ambassadors flying the South African flag across the world. During 1995 the unit displayed a Boeing 707 at the IAT RAF Fairford in the United Kingdom with huge success. Other visits abroad included the mission in July 1994 to fetch the crew of Shackleton 1716 that went down in North West Africa, visits to Moscow in 1995, Rio de Janeiro in 1996, Haiti in 2004 and the United Kingdom in 1996 and 1999. In 2001 and 2002 the squadron provided support to the German Tornado deployments to TFDC Overberg from Ongolstadt, Manching in Germany. During 2006 the squadron was involved in the Gripen development programme with a 707 flying to Sweden to conduct in-flight refuelling trials.