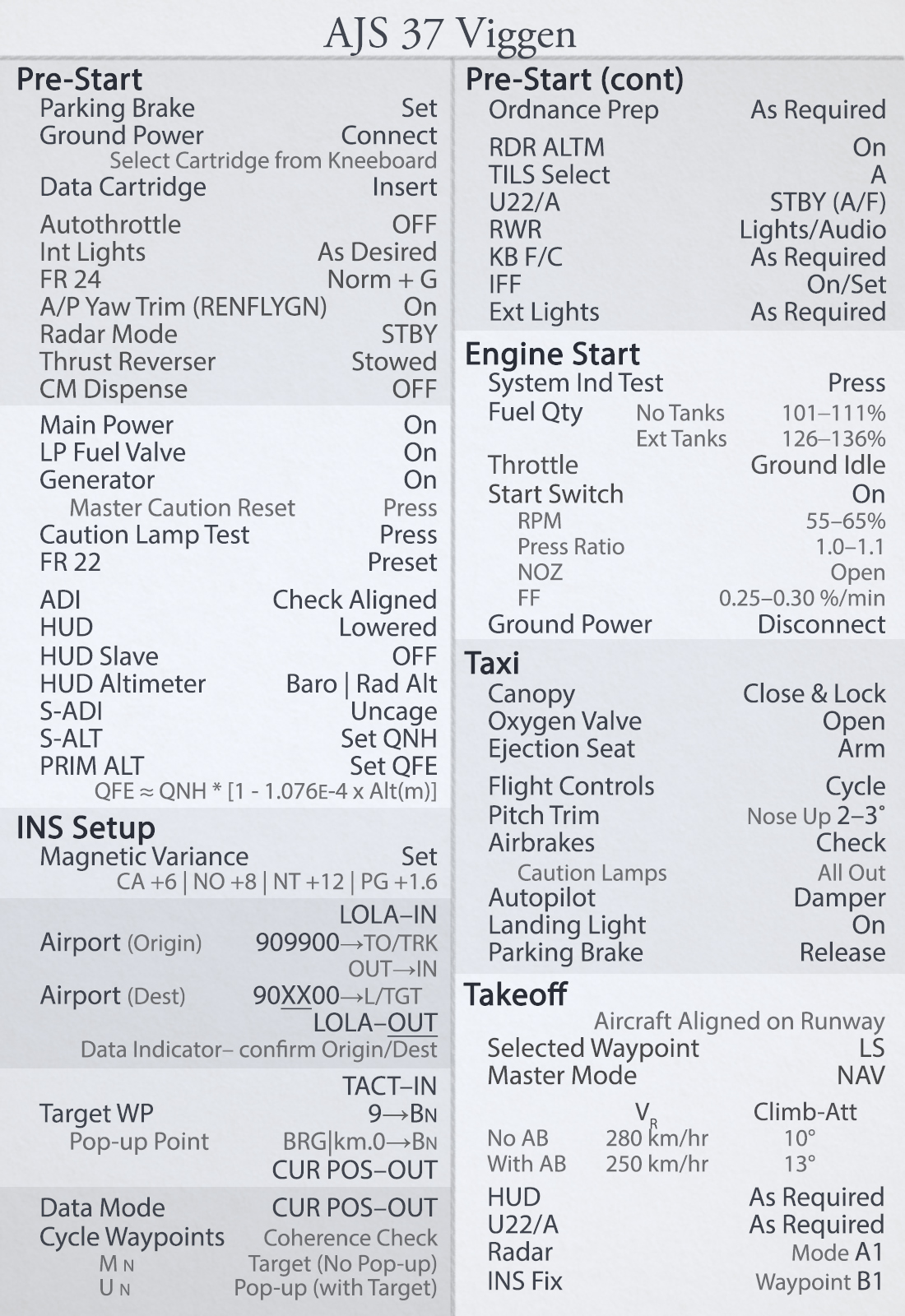 Тип - Документ
Автор - jcagle
This is the Standalone version for start-up checklists for all aircraft in DCS World.<br />

'Don't be John Wayne in the Break if you're going to be Jerry Lewis on the ball'. Sage advice that was frequently given to me by a USMC Harrier pilot during a collaborative development. The aircraft list in DCS has become quite extensive, and I have increasingly felt like an oaf when trying to jump into the seat of a previously familiar aircraft.

When writing the checklists, there was an over-arching goal to facilitate a system-state perspective so one can (hopefully) appreciate the quirks of different airframes rather than being bitten by them. These are abbreviated, but have each been created by reading the manual, testing in-sim, and integrating real world procedures as helpful and available (e.g. NATOPS). A general theme, especially for Gen 4+ aircraft has been work-flow optimization by reducing head/hand movement and grouping similar tasks.

- The primary source of information were aircraft manuals provided by developers; however, virtually every start-up tutorial in DCS is different from the written procedure in the corresponding manual. So if you have not RTM, new/different does not necessarily mean wrong.

- There are two versions, Kneeboard and Standalone. The Standalone version has double the resolution for iPad or Paper printing.

- The F/A-18C and AV-8B have ballistic profiles for precision munitions.
+ These profiles were created with in-sim testing at ISA +0, they are guidelines rather than gospel
+ The motivation is to offer insight into preferred target approaches and waypoint layout in free-flowing environments (multi-player, MOOSE, etc)

- Most Russian aircraft have two checklist versions, a normal and a spatial referenced using the short-hand notation found in the MiG-21 (e.g. LH - Left Horizontal)


** Update 8-April-2020 **
- Minor revisions to reflect DCS updates to the F/A-18C and the FW 190A-8, and to fix format/typos in other aircraft
Теги: Checklist
ПРИСОЕДИНЯЙТЕСЬ К НАМ