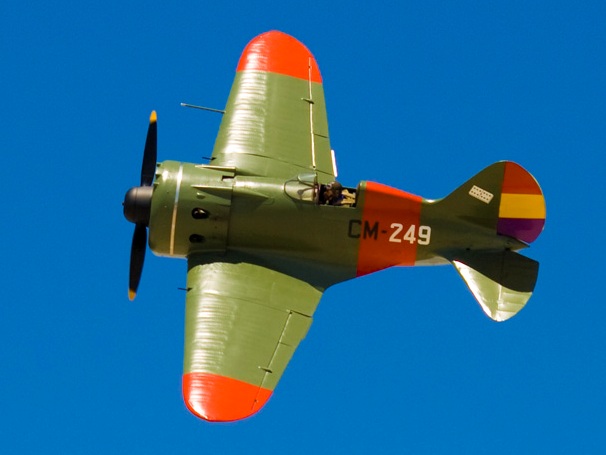 It's the CM-249 commanded by spanish ace José María Bravo.

In the early 1990s, the Alpine Fighter Collection in New Zealand contracted the Aeronautical Research Bureau of Novosibirsk to remanufacture six examples of the I-16 from wrecks discovered around Russia. As soon as the FIO heard this, they launched a campaign to bring one to Spain. A lot of people supported the project, however it was only with the support of the Getafe City Council that they achieved their goal. Getafe signed an agreement with FIO to build a new museum, and to finance part of the Rata acquisition. After negotiation, the FIO acquired their Rata for €262,000. It arrived in Spain in early 2005. FIO’s Mosca is based upon the remains of an example found in 1992 near Lake Kokkojarvi in Karelia, a region of northern Russia bordering Finland. Manufactured in 1937, it belonged to 122 Squadron of the Soviet Northern Fleet.
Теги: Polikarpov, I-16, Spain, CM-249, Bravo, FIO
ПРИСОЕДИНЯЙТЕСЬ К НАМ