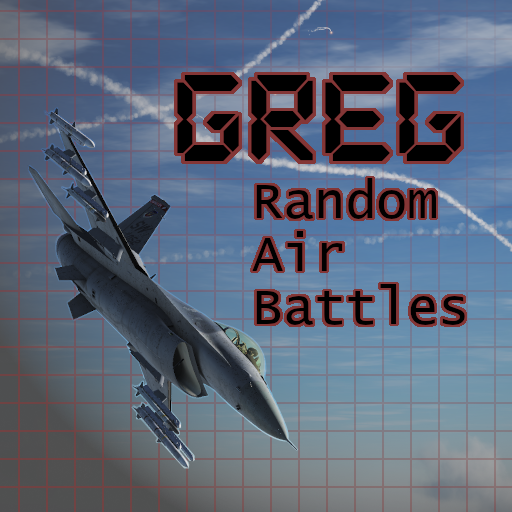 To start, the zones are placed miles apart for random, hot vs hot bvr engagements.

AWACs will randomly be available.

To sel ect the random player aircraft option after starting the mission, choose the Su-25T role labelled "RANDOM" on the red side.

This is the airplane units list for the red side. You can see that we have disabled the MiG-23 and the P-51s by adding two dashes (--) in front of those options.

It looks like this:
guns_only = 0 (This will remove all equipment fr om pylons leaving aircraft with their internal guns. You can also select the "RANDOM GUNS ONLY" Su-25t)
smoke_targets = true (Greg will put blue smoke on blue ground and naval targets and red smoke on thems)
player_side = "random" (this can be set to "red", "blue", or "random")
disable_player = false (if you want to use your own player unit in the mission editor with your favorite loadout, disable_player = true will still spawn all the other greg units).
choose_player_from_mission = true (you might have noticed a list of aircraft for the player in the lists script. If I didn't want to place all those units I made you delete, I'd set this to false and greg would refer to the list instead)

About:
GREG Stands for "GREG Random Engagement Generator", and is a project I've had a lot of fun working on.
I got inspired to make this because I really enjoyed the F/A-18 BVR 8v8 instant action mission but quickly grew tired of the predictability after playing it a few dozen times.

Change log:
--Initial release
--JF-17 support added to GREG
--Select "RANDOM GUNS ONLY" option fr om role menu to empty all pylons on all aircraft
--Radio is much more reliable for communicating with wingmen and awacs
--Greg will use all loadouts that come with the game for generated aircraft
--Updated AWACS spawning, hopefully it will be less of a sitting duck
--Complete GREG restructure. Put all unit definitions and most settings into tables so they can be accessed dynamically.
--Units more reliably spawn with an appropriate speed for their altitude (hopefully no more viggen blackouts)
--Release of version b
Теги: air to air, bvr, dogfight, random, practice, dynamic
ПРИСОЕДИНЯЙТЕСЬ К НАМ