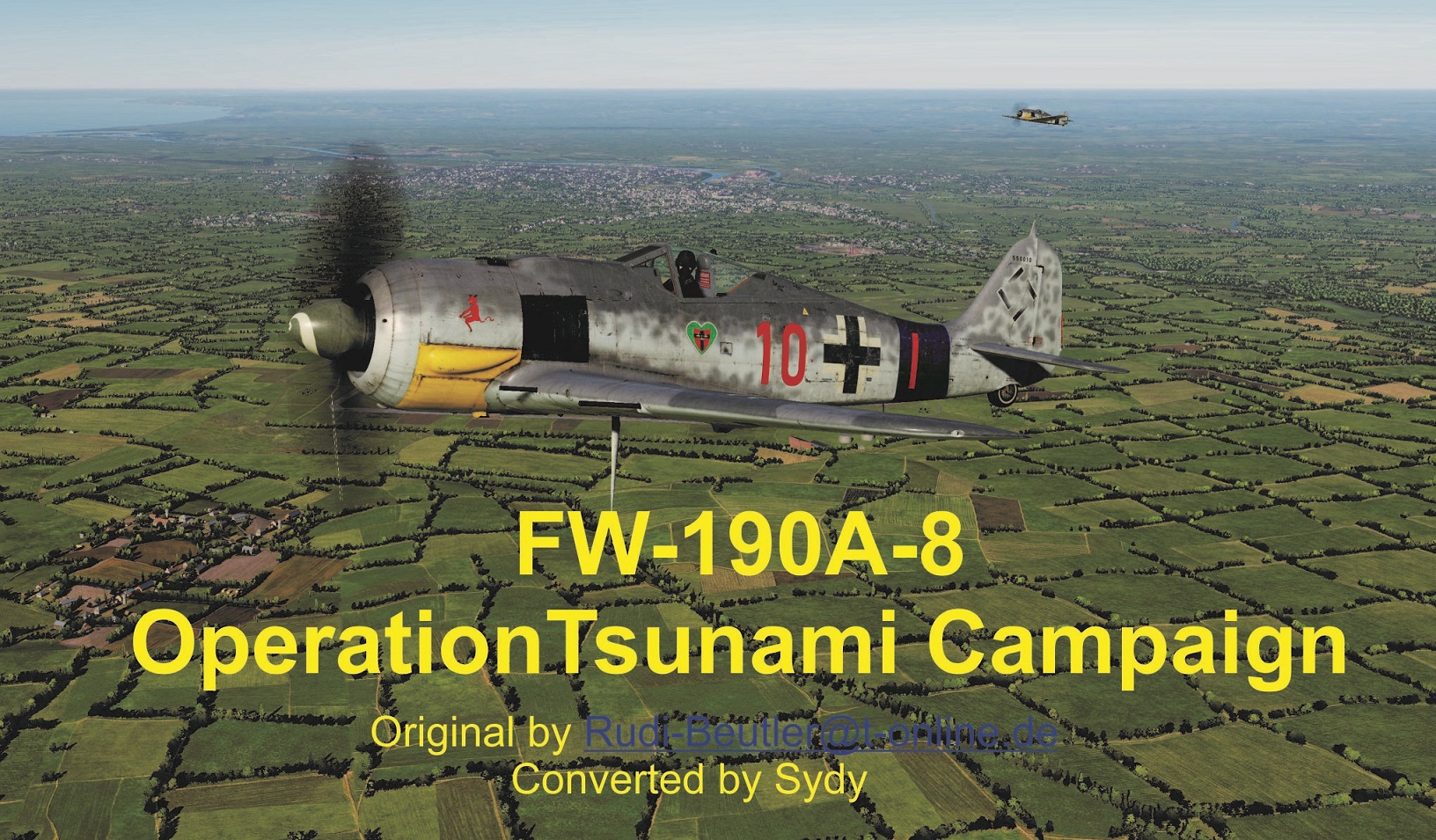 Тип - Кампания
Автор - Sydy
This is the DCS Fw-190 A-8 Operation Tsunami Campaign.

The original was for the Bf-109K-4 and made by Rudi-Beutler@t-online.de
He was kind enough to let me, Sydy, to translate it to english and convert it to the Fw-190A-8.
Even on the early access stage, the campaign is doable.

Fw-190 A-8 Operation Tsunami Campaign.
Some enemies were toned down and one 190 was added in some mission so you fly in a "Kette" instead of a "Rotte".
I do not speak German, so I apologize in advance for any gross translation error, but I am sure you will be able to understand most of it. :-)
Mind your fuel. To keep maneuverability high, the fuel is pretty close to the minimum to accomplish the missions but all of them are doable.

Instructions:
Fw-190A-8 Operation Tsunami
Operation Tsunami is a Fw-190 fighter pilot campaign with 10 missions in which one must win mainly for air combat missions. Originally made to the Bf-109 by Mr. Rudi Beutler who kindly let Sydy to convert and translate it.

The following is required:
- DCS version 2.553 stable
- Fw-190A-99 module
- Normandy map
- WW2 Assets pack.
The contents of the packed file must be saved in the folder "F:\Eagle Dynamics\DCS World OpenBeta\Mods\aircraft\FW-190A8\Missions".
The text files nor the PDFs do not need to be copied there.

03.04.1944 Normandy
The situation for the German Wehrmacht is very bad. On the eastern front you are in retreat. Fuel and supplies are scarce. Several hydrogenation plants have been destroyed by bombing or heavily damaged. Right now, the Allies are launching the "Operation Tsunami", a major assault in Normandy. The "Operation Tsunami" is successful.
The German Air Force is also equipped there only with a minimum stock of aircraft. In the next few days, the Luftwaffe is to secure with the remaining ground forces, airfields and strategically important places until reinforcements arrive.

Once again, thank you Rudi.

All the best guys and good hunting.