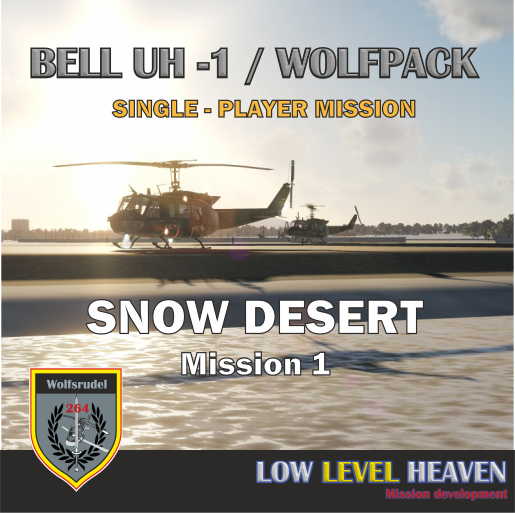 There is no clear frontline, and the enemy may be any ware around.

Enemy forces occupy the town of Kislovodsk, and the high command decided to drive the enemy out of the city in an offensive called SNOW DESERT.

Our Crew of 4:  Peter the commanding officer in the left seat, Hans and Tom, the Gunners in the rear,  and myself, the pilot in command, in the right front seat.  We are an experienced team flying together for quite a while, and we are part of the UH-1 squadron WOLFPACK.

The offensive starts today at around  10:00  PM local time with artillery shelling.

Our squad’s goal is, to transport infantry troops preferably undetected to the southern suburbia of Kislovodsk securing a landing zone, while our main forces are attacking the city from the north.

- The first group of soldiers is waiting at a camp close to Mineralnye Vody Airport. - The second group is waiting at a FARP close to the city of Essentuki only a few miles north of Kislovodsk.

Right bevor our squad gets close, a squad Tornados will take out an air-defense position, located close to the landing zone.