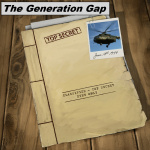 Тип - Мультиплеер миссия
Автор - Apache600
- Version 1.9 -
A fantasy mission where the Allies have developed numerous secret advanced aircraft, decades ahead of their time, and are forced to employ them during daylight operations in France.