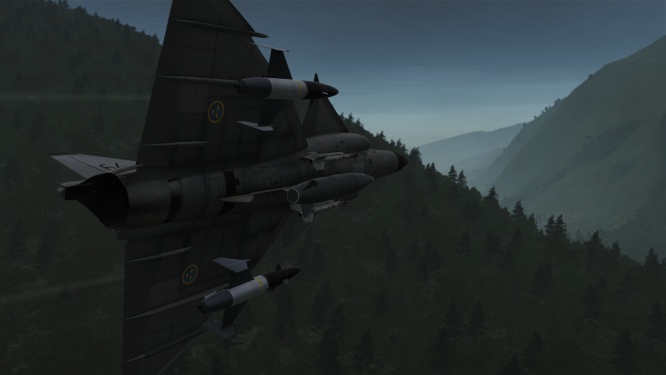 Type - Single mission
Author - IAm4U2DIE
Russia has invaded northern Georgia and has taken over the Abkhaz territory. Gudauta and Sukhumi air bases are controlled by Russia. Russian armed forces’ southernmost thrust has reached Ochamchira and Tkvarcheli on the Galidzga river.

US, UK, Norwegian and Swedish air forces are operating from Senaki-Kolkhi and Kutaisi AB. Coalition ground forces are in the process of securing the city of Zugdidi. Meanwhile a small Georgian naval group is racing towards a Russian naval invasion force in order to sink it down before they unload their ground troops.

Note: This mission is set in the same universe as Operation Iron Shield by Leodaman (uploaded on 16.02.2018)

Your task is to conduct an anti-ship strike mission deep within enemy controled territory to destroy the escort ships protecting the Russian naval invasion party. Partial to full destruction of the red warships will facilitate their engagement by the Georgian Navy.  In order to avoid interception by enemy CAP, fly low in the valleys following the flight plan attached to the mission briefing.

In order to succeed, you will have to accurately navigate between valleys and waypoints as you will have to break through the solid cloud cover every time you jump over a mountain range to enter another valley to remain below enemy radar coverage. The enemy coast is awash with SAM sites so stay very low and limit your exposure to only a few seconds during the attack while you deal swiftly with the targeting and firing of the missiles. You may want to turn your AJS 37 into an AJ 37 to make this mission a more challenging yet more rewarding endeavour by turning TERNAV off (input takt 581000).

Do not fire RB 04 missiles over land as they will crash.
Tags: AJ 37 Viggen, RB-04E missile, Anti-ship strike, deep strike mission
FOLLOW US