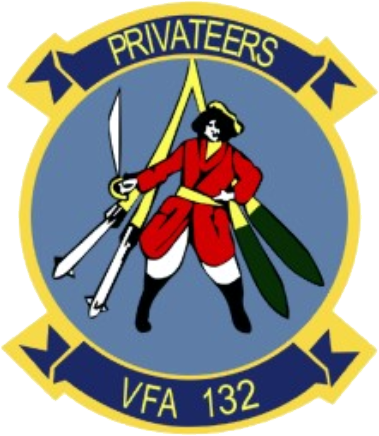 Type - Skin
Auteur - sideshow
This livery is based on the  VFA-132 Privateers.  They were the first "VFA" squadron when they stood up at NAS Lemoore in 1984.  They also took the F-18 to combat first in 1984 when they deployed HARMS and Shrikes over Libya. In their eight year existence, VFA-132 conducted numerous operations in the gulf.  VFA-132 only flew "A" model Hornets, but I feel their impact on the program deserves recognition.

VFA-132 Privateer's CAG skin.  I'm hoping to find better photo's so I can use their unique font on the side number, as well as "VFA-132" tags.  The "NAVY" was the font used on this livery was salvaged from a photo I found on line.  This is a work in progress.
Tags: VFA-132, F-18C, Privateers
FOLLOW US