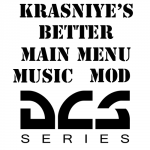 Type - Son
Auteur - Krasniye
This mod replaces the menu music of various modules to actual written and fitting songs relating to the aircraft.

THIS MOD IS NO LONGER BEING DEVELOPED
This mod replaces the default tracks to various modules with relevant music. Use JGSME to Install.

----------Installation----------
Use JSGME and extract the corresponding folder in your designated JSGME mods folder, for example if all you own in the Sabre you would only put the
'Kras'MenuMusic F-86 Sabre' in your JSGME folder and activate it using JSGME.

Songs Currently in the mod:
A-10C - Thunderstruck/Big Gun by AC/DC
F-86 - Johnny B Goode by Chuck Berry/Rocket 69 Connie Allen
FC3 - The Unsung War (Ace Combat 5 theme) by Various Artists
M-2000C - Into the Fire by Thirteen Senses/La Marseillaise
MI-8 - Polyushka/Kalinka performed by the Red Army Choir
MiG-15Bis - National Anthem of the USSR (1944)/Let's Go! Sung by the Red Army Choir
MiG-21Bis - The Hymn of Red October and The Defenders of Moscow sung by the Red Army Choir
P-51D/TF-51D - Boogie Woogie Bugle Boy Of Company B by The Andrews Sisters/Guns in the Sky by Glenn Miller
Su-25T - Soviet March (Red Alert 3) by Various Artists
Uh-1H Huey - Run Through the Jungle by CCR/Paint it Black by The Rolling Stones

I WANT your suggestions! Aircraft already on the list? I plan on doing optional songs so don't be afraid to suggest!
I can't honestly know every genre and song so input can help make the mod better. It sometimes takes quite awhile to find a fitting song.
You can contact me at /u/krasniye on Reddit or Krasniye on Steam.