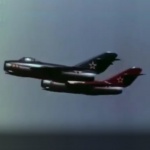 Take off from Karsnodar-Pashkovsky and fly VFR to Waypoint 1 Maykop NDB. When over Maykop, ascend through clouds and once clear make a right turn from there and fly over the mountains using Sochi-Adler NDB. Overfly Sochi-Adler NDB and make an IFR decent until you break through the clouds. Make a 180 degree turn and land at Sochi-Adler.

You can use Tuapse NDB as a way of determining your position on your way to Sochi-Adler. For example having it at 90 degrees to your right will give you an approximate half way point. Use your Near/Far switch!

Use caution with your IFR ascent and descent through clouds, there is a fair amount of turbulence. It is suggested to keep your aircraft's wings level until you break through. Ceiling 1500m, tops 3000m.