The development of advanced allied fighters resulted in the Fw 190 D–9 variant which first saw service in September 1944. This variant had a larger nose that housed a more powerful Junkers Jumo engine that produced 2,100 hp with the MW-50. The D-9 was designed for high altitude aerial combat and is a worthy adversary to the P-51D Mustang. 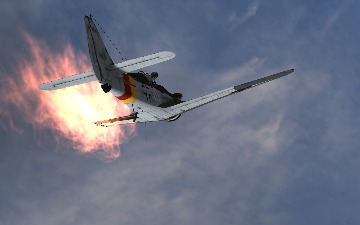 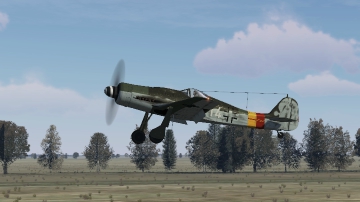 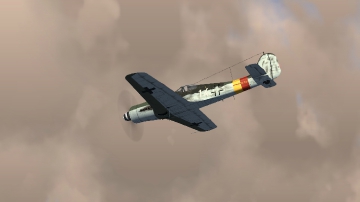 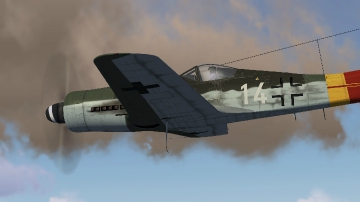 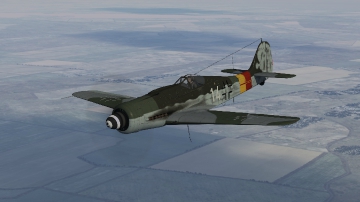 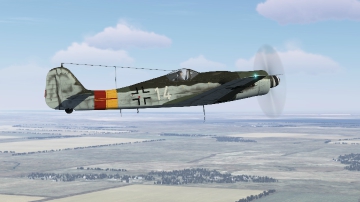 The D for Dora variant of the famous Fw 190 fighter was nicknamed the Long-Nose by German pilots as well as the Allies. It was a departure from the radial-engine earlier variants and featured a more powerful inline engine, which gave the aircraft its characteristic long-nose shape compared to the iconic Fw 190A. While experts may still argue about the Dora's looks, the performance gains were clear. While the earlier variants excelled at lower altitudes but suffered higher up, at the most crucial altitudes where Allied bombers operated, the Long-Nosed 190 could easily match the best the Allies had to offer at all altitudes.

The Focke-Wulf Fw 190 is not just one of Germany's greatest fighter planes; it is perhaps one of the most famous aircraft of the entire Second World War. Featuring many advances and innovations, it broke new ground in terms of pilot comfort, ease of use, and versatility. First appearing in 1941, it was a rude awakening to the Allies, easily outclassing the best-Allied fighter of the time, the British Spitfire Mk V. In the skies over France, it had no equal for many months as the British scrambled to produce its answer, the Spitfire Mk IX almost a year later. 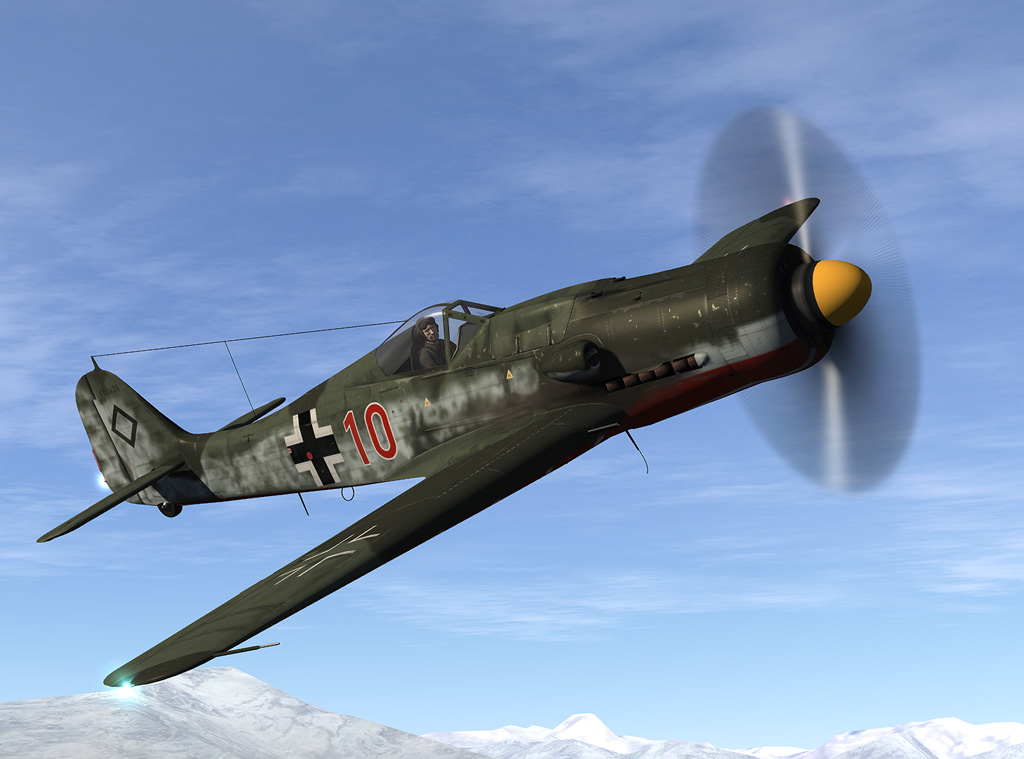 The work on the D series began in 1942. As the new Junkers Jumo 213 engine offered clear improvements in performance, the decision was made to use it with the 190 airframe. While Kurt Tank, the Fw 190's lead designer preferred the Daimler-Benz DB 600 series, the engines were already used in Messerschmitt fighters, while a surplus of the Jumo 213 bomber engines were readily available. The brand-new 213, an improvement on the earlier Jumo 211, offered 1,750 hp (1,287 kW) of take-off power that could be boosted up to an astonishing 2,100 hp (1,508 kW) of emergency power with MW-50 injection.

While originally intended to serve as a bomber interceptor, changing realities of the war in the air meant that by the time the Dora entered production in August of 1944, it mostly saw combat against enemy fighters or in a ground attack role.

The earliest pre-production variants designated D-0 had the external wing guns removed; this was often reversed and future D variants were produced with the wing guns. Most D-9s intended for lighter anti-fighter role were still built without the outer wing guns, featuring a pair of 13mm MG 141 machine-guns and twin 20mm MG 151/20E cannon.

Initial opinion of the upcoming Dora was not very high. Kurt Tank always stated that the D-9 was intended only as an interim stop-gap until a more perfect Ta-152 design could enter production. However, once Luftwaffe pilots got their hands on the stop-gap Long-Nosed Dora, they were pleasantly surprised. The performance and handling was good. When flown by capable pilots, the aircraft was more than a match to Allied fighters.

The Long-Nosed Dora is considered the best mass-produced late-war Luftwaffe fighter. In total, over 700 Doras were produced out of a total Fw 190 production run of over 20,000.

The cockpit in the FW 190D-9 was a revolutionary design that attempted to put all levers and instruments easily within reach. It was one of the first examples of ergonomic cockpit design, and can be seen as the early precursor of today's hands on throttle and stick (HOTAS) cockpits.

The DCS: Fw 190 D-9 cockpit is a 100% six-degrees of freedom (6 DOF) cockpit that allows complete freedom of movement around the cockpit. This includes all panels, switches, dials, buttons being animated, rendered in the 3D, and with high-resolution textures. Both day and night lighting is available. 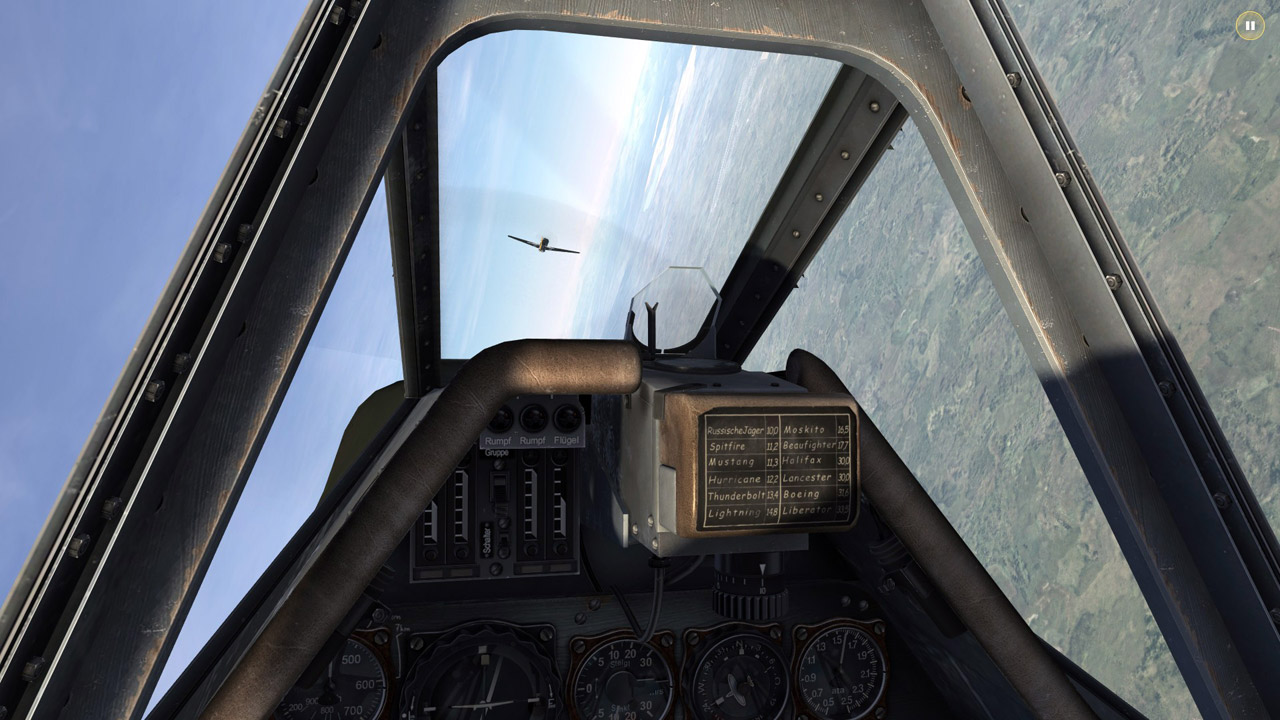 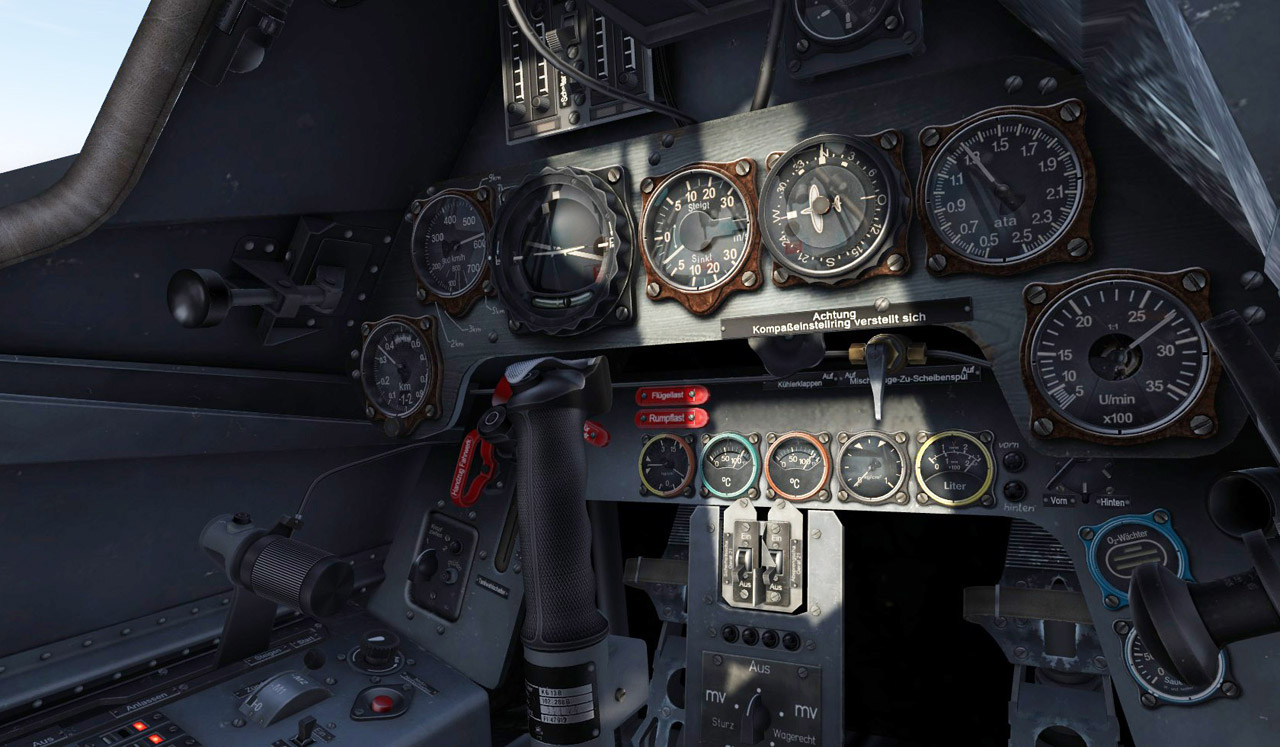 The 3D model is a very precise and accurate of the Fw 190 D-9 that includes:

The flight dynamics of the Fw 190 D-9 are a further develops the Advanced Flight Model principles started with the Su-25 and then later improved to Professional Flight Model (A-10C, P-51D etc.).

A true thermodynamic engine model for all engine modes from idling to maximal power is provided.

Jumo-213 had its own, very distinctive combination of a variable performance supercharger controlled with a complicated regulator to maintain constant air mass flow. Low power ratings were controlled with a second throttle directly linked to the engine lever. This throttle was used for emergency operation in the case of Engine Control Unit (MBG) malfunction.

The second original feature was that fuel flow was programmed and was a function of engine lever position as the airmassflow regulator maintains the necessary mixture strenght.

The engine model truly simulates all these features providing authentic engine responce to the throttle and ambient conditions. 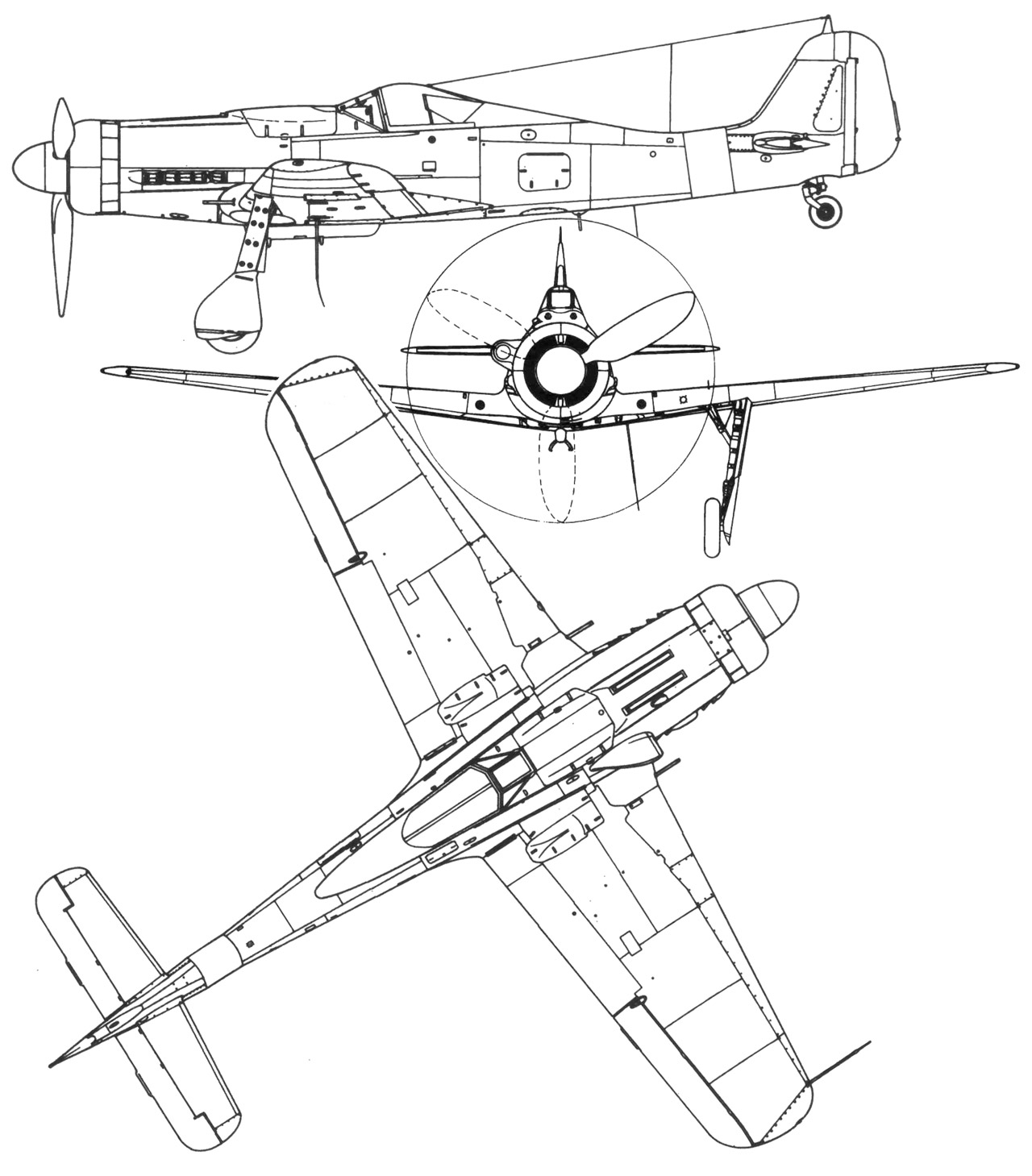 The Fw 190 D-9 has a conventional control scheme with surfaces that include a vertical stabilizer, rudder, horizontal stabilizer, two elevator, two aileron, and flaps.

As the Fw 190 D-9 is generally very stable in flight, only the horizontal stabilizer has trim adjustable in flight. Other control surfaces have trim tabs that can be adjusted on the ground.

The control system for the aircraft is advanced for its age and uses a system of push rods and control cables. Compared to a conventional pulleys and cables system, the controls in the Fw 190 D-9 are lighter and more precise.

The flight stick can be moved forwards and backwards in conventional fashion to control the elevator. It can be moved 20 degrees forward and 21 degrees rearward.

The flight stick can also be moved sideways to control the ailerons in conventional fashion. Aileron deflection is limited by mechanical stops in the control stick mounting base.

Flap position is controlled via push buttons on the left-hand side of the cockpit. 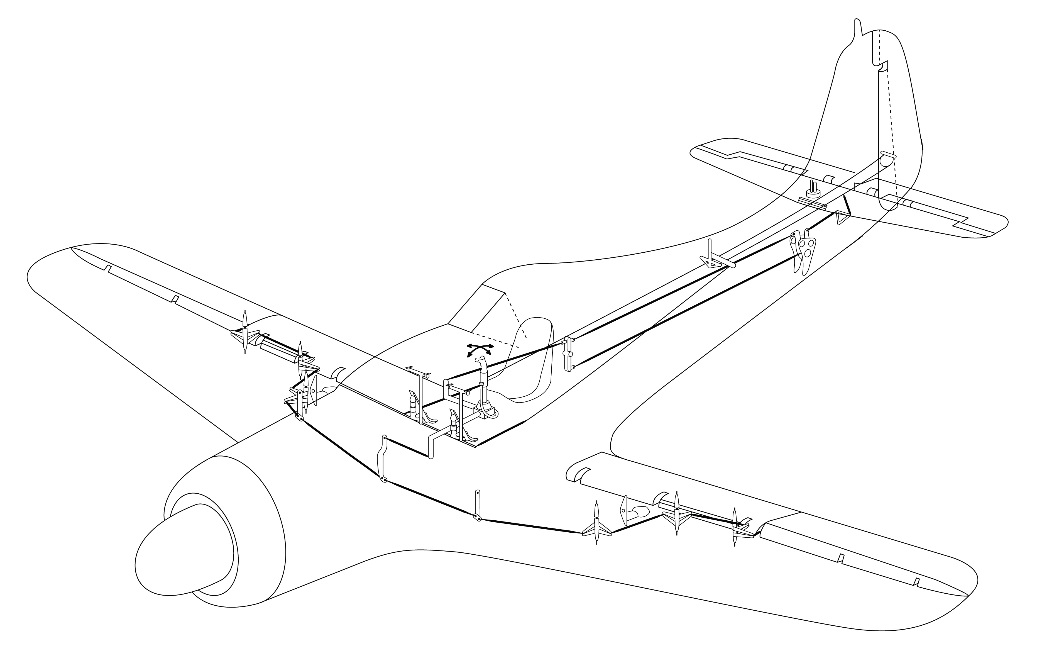