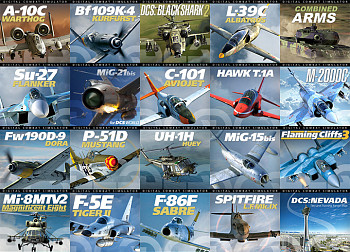 You’ve waited all year for the big sale discounts, and they are here today with the start of our Christmas Sale! Get 40% off on all DCS World e-Shop items, with the following exceptions:

Leatherneck Simulations, in association with The Fighter Collection and Eagle Dynamics, are pleased to announce the AJS-37 for DCS World is now available for pre-purchase! The pre-purchase provides a 20% discount off the retail price!

The AJS-37 Viggen is a Swedish double-delta supersonic attack aircraft from the late Cold War. It was the backbone of the Swedish Air Force during the Cold war, serving as the main attack and anti-ship platform. The AJS is the 90’s upgrade of this 70’s era aircraft, adding several advanced weapons and systems functionalities. The aircraft was designed around the pilot, with an excellent man-machine interface, supporting the pilot through the smart use of autopilot systems, radar and HUD symbology in order to deliver the ordnance onto targets from treetop level with high speed attack runs.


This is the product of several years of passion and dedication and we are incredibly excited to bring it to life in DCS World! We hope that you will have as fun learning and flying the aircraft as we have had in recreating it.
Share:
FOLLOW US