Type - Skin
Author - Mike Busutil
Weathered & worn, this American P-47D Thunderbolt is the workhorse of the WW2 Airforce fighters and has a confirmed 81 kills in aerial combat and 106 ground kills. With a very respectable record as a fighter and lead aircraft, this P-47 wears traditional colors and the nickname "WarChief"  as a tribute to the brave and respected Native American warriors.

-Heavy weathering and chipping done to both the surface layers as well as the roughmet layers.
-The USAF logo on the side of the fuse is more faded then the one under the wing since they get more sunlight.
-Intercooler exit doors open to show the painted USAF logo.
-Hand made invasion stripes under the the wing to include the landing gear doors and dive brakes.
-Reflectivity maintained throughout bare aluminum.
Tags: Busutil, P-47, P-47D Thunderbolt, Thunderbolt II, WarChief, Winner
Download Detail
DCS: World 2.5
A-10C II Tank Killer

Type - Skin
Author - danperin
Here's a skin from the 442d Fighter Wing for the A-10C  (works on the A model) and another for the A-10C II.
*Please delete the older versions* 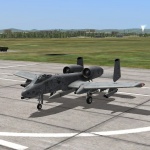