Scramble and defend Batumi airdrome against a sneak attack by well armed insurgents! Then take the battle to them. 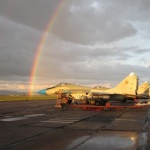