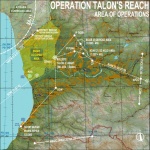 Three platoons of US special forces, under the callsign TALON, are moving in "light and fast"  just north of Senaki, taking advantage of a weak point in enemy lines.  The goal: to capture a regional high-point on Eki Mountain.  From this vantage point,  TALON will have a commanding view of the enemy positions to the north, west and south.

Boar 21/22 and Boar 27/28 will be providing support for TALON as they gain a foothold on Eki Mountain.  Once in position, TALON will be calling in air and artillery strikes on enemy positions across the valley.

A CIA unit, callsign "PROPHET", will be providing real-time intel to TALON based on enemy radio chatter intercepts and drone recon.

VAPOR 51 & 61 (2xF-117A) will be tasked with taking out the bridges along the Inguri River, taking away the Abkhazians ability to reinforce from the north.

BONE 71 (B1-B) will be tasked with pummeling the Eki Mountain summit defenses and communications towers just prior to TALON's arrival.

UZI 41 & 42 (2xAH-64D) out of Kutaisi AB, will work on the armored units along the Forward Edge of Battle Area (FEBA) near Senaki.

Type - Multiplayer mission
Author - deephouse
Georgia is in turmoil.  Over the past 72 hours, South Ossetian separatists have seized control of Tbilisi and are now operating with near impunity in and around the capital.  The Georgian government is in shambles. With the capital engrossed in lawlessness and violence, civilians are fleeing in droves.

Without sufficient warning, US Embassy personal were unable to escape Georgia prior to South Ossetian forces seizing control of both the local airports and roadways.  As of 1600 hours, the resident USMC unit, callsign GRAPPLER 11, had barricaded the embassy compound and were actively defending against an onslaught of separatist attacks.  These attacks are believed to be deliberate actions by rouge separatist factions unconcerned with bringing the United States into the fray.

Type - Multiplayer mission
Author - deephouse
Coalition air forces are operating south of Maykop this morning against enemy ground and air units scattered throughout the area north of the Georgian border.

Sandy 51/52 and Sandy 71/72 are flying standby/airborne CSAR patrol off the coast, southwest of the coalition area of operations.