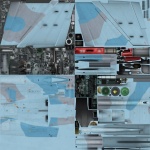 Type - Skin
Author - Ala13_ManOWar
An example of a real UN Spanish UH-1 instead of default one. Made with GK template. Just install as usual.
Download Detail
DCS: World
Other

Type - Skin
Author - Home Fries
Note: this is an EXE installer that creates shared texture folders and adds paths to your autoexec.cfg.
This is a collection of six skins representing Five units in the Vietnam War.  Each skin represents an airframe on which one of the crewmembers was awarded the Medal of Honor.

The skins included are: