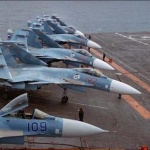 Type - Single mission
Author - Rmk80
Operation Krasnodar is a multi-role air operation on the city of Krasnodar and its two airports. On mission start, the amount of enemy resistance, their type, position and skill is randomly set.
Select the role you prefer (SEAD/CAP/CAS) and use your support flights wisely.