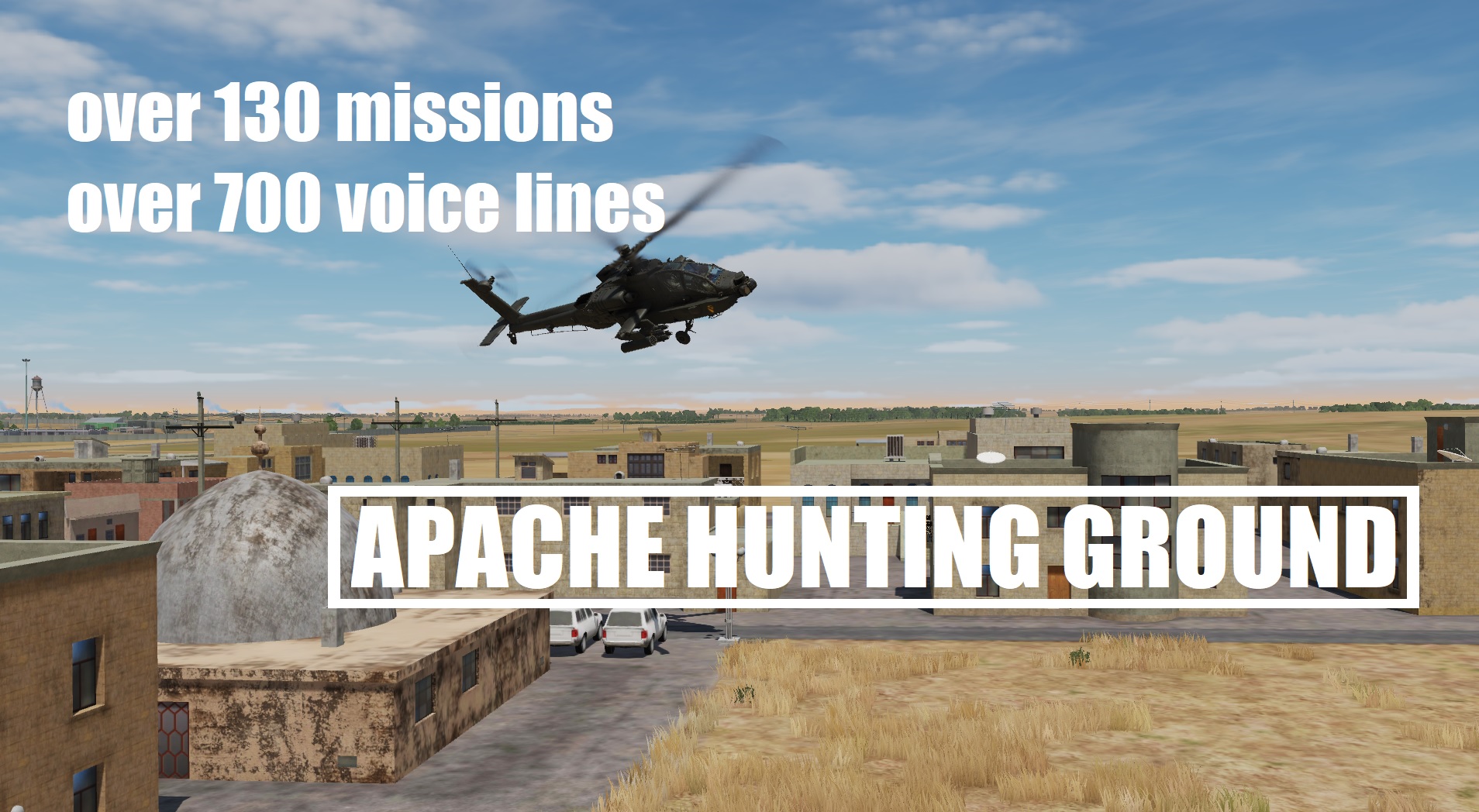 Type - Multiplayer mission
Uploaded by - theSithis
130 missions across Syria with 5 different difficulties.
Almost all aircraft available and fully voiced with over 700 voice lines by a dozen voice actors.

Volks video on it: https://www.youtube.com/watch?v=Chtdjwc-ByU

The goal was to take the concept of the classic Operation Bactria and use mechanics similar to those in the Dispatch missions to bring alive a unique helicopter combat enviroment. This mission builts on the Crocodile Hunting Ground in a number of ways.

Welcome to the hunting ground,

This mission was made with the Apache in mind, however all helicotpers and most fixed wing aircraft are available and triggers work for all of them.

If you have trouble hearing the voice lines, increase "In Helmet" in the audio options. Pen and paper are recommended, so you can write down the information passed to you. MGRS will also be available in your comms F10 menu (except range 3).

All directions given as true courses.
Mag Var is +5°

You are stationed at Taftanaz and from here you can proceed to one of five areas. Once you enter the area you will receive an F10 radio option with which you can trigger tasks in the area you are in. There are 20 to 30 tasks per area assigned to you in a random order. In order to skip a task simply report ready for tasking again.

The Waypoints provided are the respective RP/BP. The AOO is entirely within MGRS 37S GZD.

The 16th Infantry Regiment is in charge of the area around this regional capital. Insurgent forces are holding the wooded hills west of the town and even managed to take control of some parts of the eastern plains. The ground troops need all the help they can get in a variety of COIN tasks. FARB London is available 2km East of the city center at BV 6030 6678.

The region around the town of Antakya has seen heavy fighting and the 34th Armor Regiment in charge of the area often have to fight street to street and house to house. They are happy about all the CAS they can get and are not shy about putting some smoke on the deck. FARB Dallas is available for rearming and refuelling at 045° 6,5km from the city center at BA 4920 1480.

German advisors are supporting the local forces trying to hold on to Aleppo but they are being pushed back by numerical superior insurgent forces. They are desperately trying to prevent encirclement, while civilians are fleeing the city. The JTACS are well trained and give you proper 5-Lines for your targets, which you will need since sticking your head too far over roof height will certainly attract the attention of MANPADS and Zeus AAA.

The 4th Cavalry Regiment is in charge of the area at the edge of the desert around Abu al-Duhur. The airport is just east of the city and serves as one of our supply bases. The COIN operations in this area vary wildly from mundane route recon to high-intensity Spec Ops raids. Navigating this featureless landscape and hitting your WPs on time will test your navigational abilities, while always having to be mindful of MANPADS.

Remnants of the old regime have reformed two armored battalions. Advisors of the 70th Armor Regiment are helping the newly formed army to establish defensive positions 20km south of here, but they need our fire-support, to buy them time and be able to hold off the enemy armor.
(Difficulty can be turned down from very hard to medium with an F10 radio option)
Tags: Apache, Hunting, Bactria
FOLLOW US