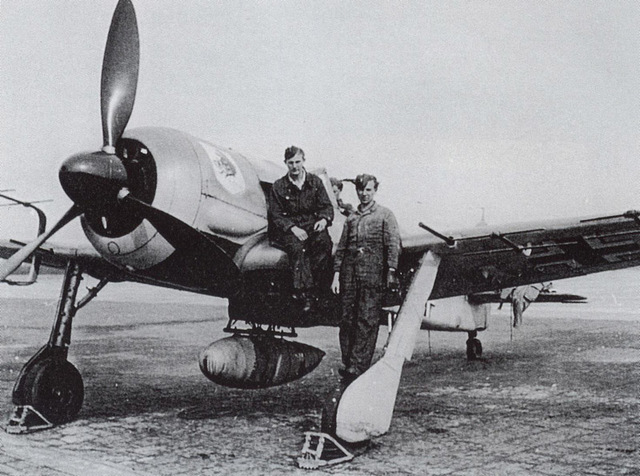 Type - Single mission
Uploaded by - baco30
(As kindly requested by few Users, this is the mission originally made for the Fw190-A8, converted for the Bf109K4)

One of the airborne radar used by Luftwaffe's night fighters was the Fug 217 Neptun. In the version J2 it equipped also few Antons employed in the "Nachtjagd".
In this mission I tried to reproduce the kind of operations as narrated on books like W.Johnen - "Duel under the stars" and P.Spoden "Enemy in the dark". It's a mission where patience and precision instrument flying are required....

The Fug217-J2 was employed on single engine night fighters. It was only a range detector: no azimuth or elevation were provided. The 1st 300mt was hidden by the own "null" signal. Over land its range capability was equal to the AGL altitude, with a maximum of 4~5km. Over sea the water's echo generated a clutter covering the range for the first 2~3 km ahead (so called "sea snake"), thus increasing the range capability beyond the nominal limit.
The system could see approximatly +/- 60° azimuth and +/-90° elevation.
Inside those limits, the pilot could see spike(s) on an oscilloscope indicating the distance of the airplane(s) ahead. The radar had also a backward view capability limited to ~2km, that was useful to detect approaching aircraft fr om behind or if overtaking a target, but the signal response (spike) was the same as per ahead targets, so it was on the skill of the pilot to understand the correct situation.
The system could operate on two frequency to be switched in case of jamming or malfunction.
I made a script that shows on the up-right text display a schematic view of the screen response. On the mission briefing, some images better explain the functioning.

Normally the fighter was vectored by the Wurzburg/Freya operators to be 4~5km on the tail of the target (One lim it of the Freya was that it could track only one target at a time). At that point, the pilot had to use the Fug 217 to determine the precise distance and approaching speed. At distance of 2~3km, making pitch and/or heading variations, with some practice, it was possible to determine also if the target was above or below and right or left.
Then approaching slowly in the last 3~400 mt it was only a matter of visual detection. A cloud or haze layer with moonlight behind could reveal the shadow of the target. Another clue was the wake turbulence (I made it ON on the Mission Options).

There are 3 possible scenarios: A formation of B17G going to bomb a major town (sorry there are no Lancaster or Wellington in DCS ...); a pair of A20G going to drop supplies to partisans; A mosquito flying high to calibrate the Home Chain Radars.

If you are interested you can see the Fug 217 Manual here: https://commons.wikimedia.org/wiki/File:Neptun_FuG_217.pdf (that's for the R2 verison, backward warning device, but the functioning is the same). I enclosed a google translation to be opened with Notepad++.

NOTES: radar operator voice is the best I could find for free on the web.
- As it was in the real life, the operator had to make a rough guess and give indications to the pilot. So, when you are very close to the target, unless you are chasing "on tail", do not expect precise indications but judge the aspect angle according to your heading, target track and radar spike.
- Unfortunatly the AFN-2 doesn't work (and I don't expect it will ever), otherwise this mission would have been more realistic.
Tags: Bf 109 K-4, Kurfürst, FuG Radar, Channel map
FOLLOW US