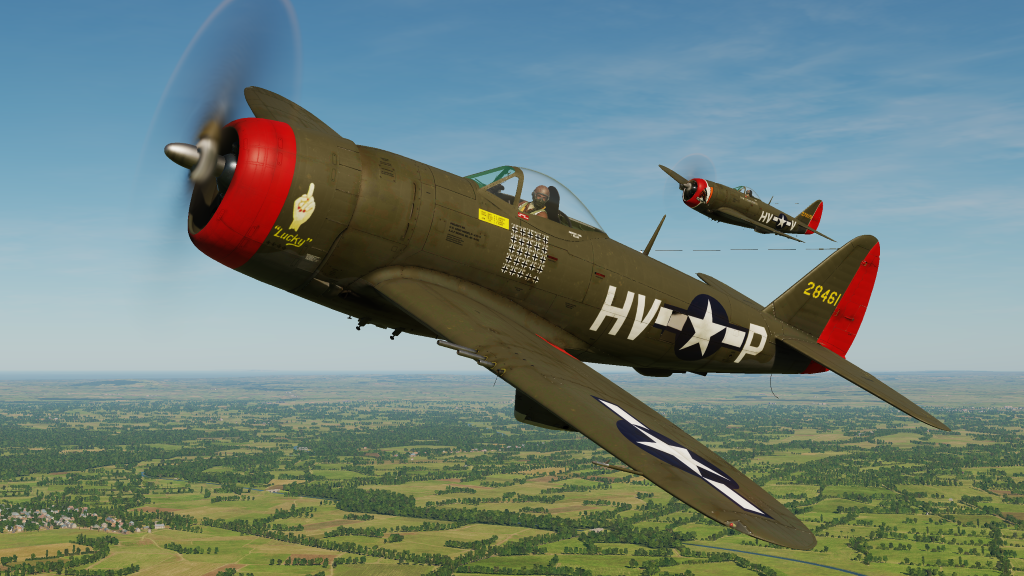 Lt Robert Johnson was assigned to 61FS, 56FG, 8 Air Force USAAF, on April, 1943. This is is Bob Johnson's third aircraft."Lucky" was used to score his third, fourth, fifth and sixth victories before being lost in the North Sea on 22nd March 1944 with Dale Stream at the controls. Johnson had previously flow two C-Models Thunderbolts christened Half Pint and All Hell, and had shot down his first two kills in the late aircraft, C-5 41-6235/HV-P. Some weeks prior to "Lucky's" watery demise, Johnson had discarded the aircraft in favor of P-47D-15 42-76234/HV-P, which he logically chistened "Double Lucky". This aircraft duly lived up to its nickname, as the ace is assumed to have scored all his remaining kills (bar his last two) in it, although the serial number(s) of the aircraft used for this string of victories (coded HV-P) has not been 100 per cent confirmed. Finally, now Capt Johnson flew P-47D-21 42-255/LM-Q Penrod & Sam to achieve his final two kills - number 26 ans 27.

Stenciling: Factory standard. Note; this aircraft was waxed and polished by crew chief for additional speed advantage. The stenciled code HV is tilted slightly down on the port side. New type stencil with crew names in white lettering and red emergency canopy release plus second canopy release in White on canopy rail. Up to 25 Balkenkreuz and acft type victory tallies now on side fuselage under cockpit.

2nd Option
Extract the Robert Johnson Lucky folder to your C:\Users\"YourUserNameHere"\Saved Games\DCS.openbeta\Liveries\P-47D-30 folder
If you don't have that folder, you may create it.