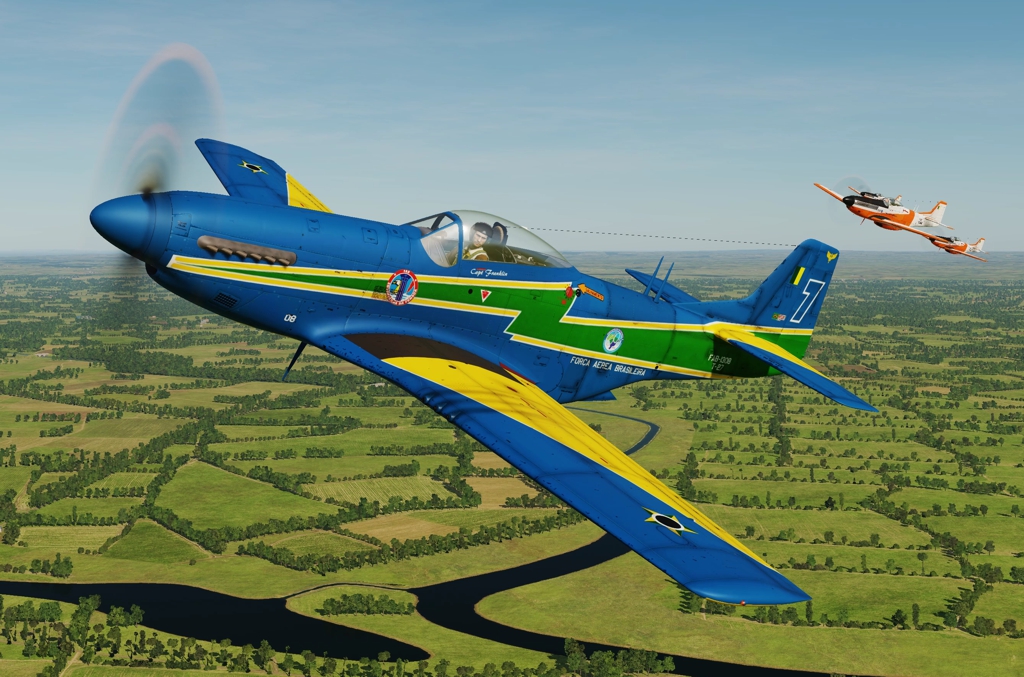 The Embraer EMB 312 Tucano (English: Toucan; About this sound pronunciation) is a low-wing, tandem-seat, single-turboprop, basic trainer with counter-insurgency capability developed in Brazil. The Brazilian Air Force sponsored the EMB-312 project at the end of 1978. Design and development work began in 1979 on a low-cost, relatively simple new basic trainer with innovative features which eventually became the international standard for basic training aircraft. The prototype first flew in 1980, and initial production units were delivered in 1983.
It has a similar performance of a P-51D and that's the reason I selected it to make this Livery.

For more history and Specs, read the PDF file.

This Livery:
This livery is fictional as it was applied on a T-27 originally, but it is a small homage to my friends that fly in the Brazilian Demonstration Squadron, the Smoke Squadron, they have my respect.
Why the sn 1308? This was the 8th airplane that came out of Embraer and was assigned for the AFA (Brazilian Air Force Academy). I had the pleasure to fly it as a back seater in October, 23rd, 2012, Brazilian Aviators Day, when some civilian pilots were invited to visit the Academy and fly with the Brazilian Smoke Squadron (EDA). It has been a long time passion for both the Brazilian Air Force and the Embraer-312 (T-27 in Brazilian Air Force) and it was a dream to come true to fly with EDA, a wonderful group of people, amazing pilots and human beings. Then, I flew with Captain Franklin on this sn1308 as #7. Now, Colonel Franklin is the Commanding Officer of the Smoke Squadron.

It worths to mention that in this flight we have two pilots what eventually became Smoke Squadron Commanding Officers: Lt Col Marcelo and Lt Col Franklin (current commander 2021-2022). Today I have the honor to share flights and missions with Lt Col Esteves flying in the same company and sharing assignments.

My special mention and homage to Cap Pipovar and Cap Carvalho, both lost in a training accident in a A-29. That excitement and happiness of them were enormous. RIP, my friends!

You may enjoy that specific experience flying as the Solo EDA#7 here https://www.youtube.com/watch?v=3-O8Ibj4Q0s

How to install:
1st Option:
Extract the T-27 Brazilian Smoke Squadron No 7 sn1308 folder to your F:\Eagle Dynamics\DCS World OpenBeta\Bazar\Liveries\P-51D

On TF-51: All my T-27 P-51 skins work well on the TF-51. You just have to extract the T-27 Brazilian Smoke Squadron No 7 sn1308 folder to your F:\Eagle Dynamics\DCS World OpenBeta\Bazar\Liveries\TF-51D or extract it to your C:\Users\"YourUserNameHere"\Saved Games\DCS.openbeta\Liveries\TF-51D folder.