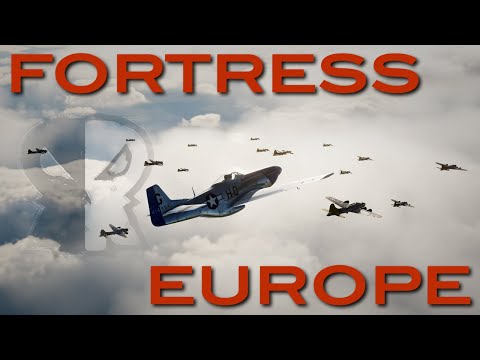 Type - Multiplayer mission
Uploaded by - reflected
Hey everyone, Reflected here. Today I’d like to introduce ‘Fortress Europe’ an epic PvP/ PvE WWII multiplayer mission I’m releasing for DCS world. I was inspired by those terrific missions Philstyle is running on his Storm of War server, so I decided to create something like that, but using the Channel map, and beefed up with some of my own ideas.


The plan was to create a massive WWII playground. The mission runs for 6 hours, and you can jump into any aircraft at any point, and you’ll still have plenty to do even if you’re the only human player on the server.

There are 3 main ground targets assigned to each side, but if you like, you can just roam the countryside looking for road and railway traffic, or ground units near airfields, industrial areas, or ships near the coast. For those who prefer air to air combat, 3 large raids will take off on each side during the mission. You can either escort the friendlies, or intercept the enemy bombers, as directed by your ground controller. There are also 6 smaller AI missions on each side that are randomized, meaning they will not always happen at the same time if you replay the mission. These are smaller formations attacking secondary targets. On top of this, AI patrols are taking off throughout the mission, and fighters are scrambled when an airfield is under attack. So even if you’re the only human player on the server, you need to watch your six.

There is also a photo recon mission available on each side, that enables you to take actual photos of the targets.

If you feel lonely, you can fly with an AI wingman.

If you still find yourself with nothing to do despite all of this happening, you can tune in to the BBC or Radio Berlin for a little entertainment.

Oh, did I mention the mission is fully voiced? There are nearly a hundred custom radio messages that will bring your ground controller to life.

Play it all alone, or as a coop with some friends, or run it on a server with dozens of players, ‘Fortress Europe’ will keep you entertained and offer something to do any time you jump into your aircraft of choice.