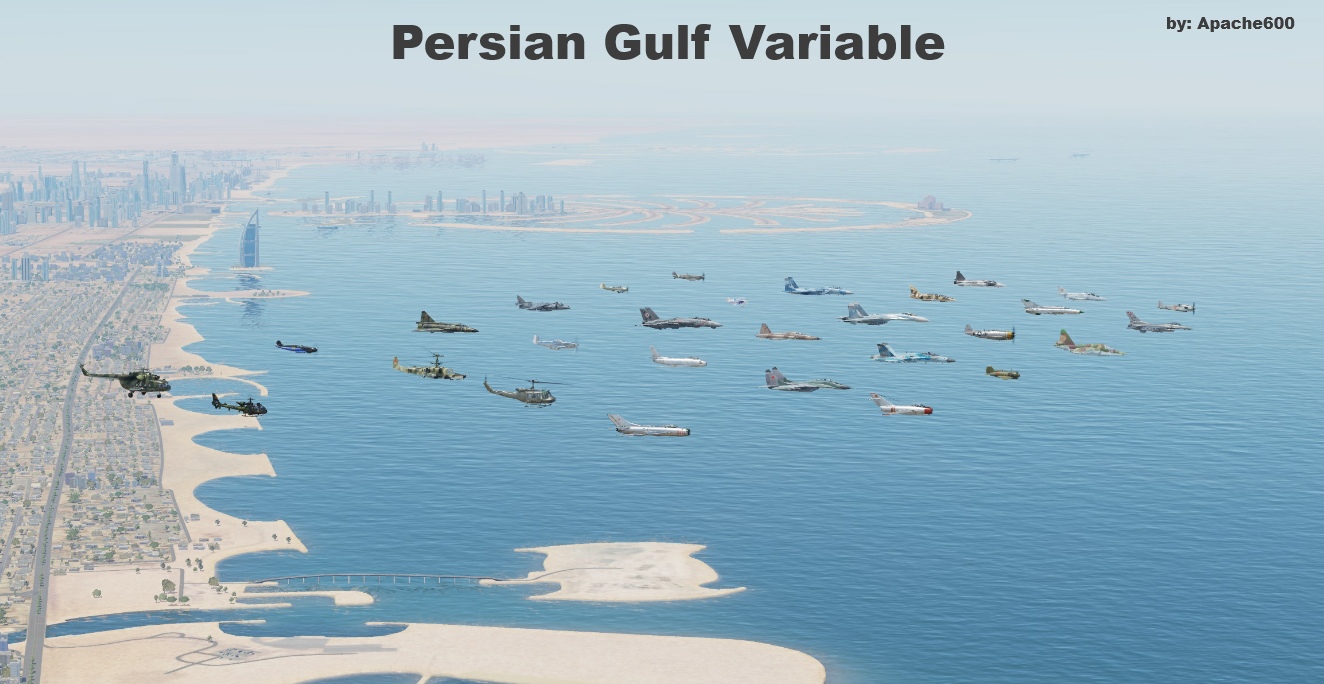 This is an all-in-one style Air-Ground, Air-Air attack mission for the Persian Gulf map, and supports every flyable platform in DCS.  There are over 50 different missions that can be played inside this one mission.  In order to activate a mission, you MUST select it through the F10 radio menu option.  Once completed with a mission, you will have the option of selecting a new mission.   If you selected a mission that you no longer wish to complete, or have selected a mission in error, you can use the "Auto-complete" radio option to delete the units and go back to the main menu.    ** NOTE - if you select the "auto-complete" option, you can no longer attack that missions units in the future. **

All Fixed wing aircraft start at 4 different Airports, or 3 different Carrier’s: Al Minhad AB, Al Maktoum AB, Dubai Intl, Sharjah Intl, CV-40 Tarawa, CVN-71 Theodore Roosevelt, or the Admiral Kuznetsov .  All the helicopters start at Al Maktoum AB.  The fleet consisting of 3 Carriers is sailing NorthEast - SouthWest, starting just north of the Palm Jebel Ali man made island.  The Kuznestov has 4 Su-33’s, the Tarawa has 4 AV-8B’s, while the Theodore Roosevelt has 2 F-14A(late)’s, 4 F-14B’s, 4 F-18’s and the Mod of Interest (Sea) and Plane of Interest (Sea) platforms which are defaulted to 3 F-14B’s and 3 F-18’s

Air Mission Difficulty definitions:  (These missions are mainly built for 1-2 players, except for the "Large Cap Group's" air missions.  Those are more suited for larger groups of player's flying together.)  Their difficulty ratings are as follows:
Easy - Either a few non-retaliatory aircraft, or a single fighter or two with guns only. (Vietnam and Modern enemies may have IR missiles)
Medium - One or more retaliatory aircraft.  Short range missiles possible.
Hard - Multiple retaliatory aircraft with possibility of both short and long range missiles.
For “Large CAP Group’s” all difficulties have A-A missiles.

AWAC's is available at 257Mhz (Chan 2 for aircraft that need it, Chan G for Viggen)  AWAC is set to Immortal and Invisible.

Tanker aircraft are KC-135’s
Texaco operates a boom.  Freq 277Mhz (Chan 3)
Arco operates 2 Drogue Baskets.  Freq 279Mhz (Chan 4)
Tankers are set to Invisible.  If the tanker runs out of fuel, or is destroyed, a new one will spawn (only 2 additional spawns for each tanker).