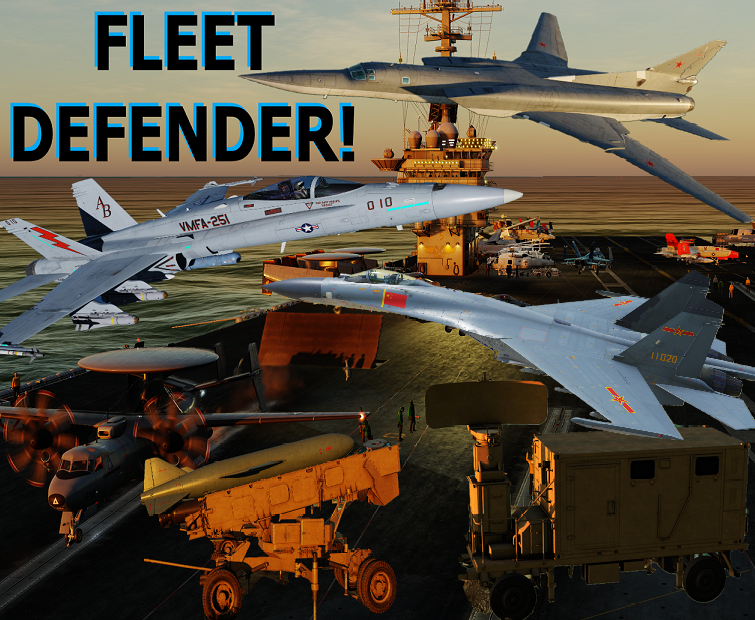 Type - Single mission
Author - GazAce
MOTHER IS UNDER ATTACK & YOU MUST DEFEND HER! This mission will test your ability to strategically manage your weapons & plot your plan of attack. You will more than likely need a refuel or two & you have two mission complete landing options.. on your Boat or Airfield. I would give this a difficulty rating of around 7.5/10 & can be completed in an hour or so. I like to thank Gierasimov for lending a hand with this one & please let me know if any issues arise & how you find it. I've posted a fly through on my YouTube ch if you care to check it out https://youtu.be/zXIUhR15apQ
Have fun & happy nailing your targets, cheers GA :-)

Depart hot fr om Abraham Lincoln 06:00 Persian Gulf.
Locate & destroy 3 Silkworm Radar units & then 4 enemy Tu-22M3 Bombers & also 1 deadly Chinese J-11A Air Superiority Fighter & then return safely back to Abe Lincoln or Qeshm Island.The Radar units are located on 3 separate Islands.. WP1 Abu Musa Island, WP2 Tunb Kochak & WP3 Tunb Island AFB. You only need destroy the Radar units & be careful as there are AAA mounted Ural protecting these assets. Once all 3 Radar units have been destroyed there will be two waves of Tu-22M3 "Backfire-C" Bombers that will immediately depart Bandar Abbas, two in each group at low altitude & heading for Mother. Once you have splashed the last of the Bombers the J-11A Fighter will depart Lar Airbase & will be "In Hot". The Bombers will be carrying extremly effective long range radar guided Kh-22N air-to-surface missiles trained on our Carrier & the Chinese J-11A will be armed with two Radar guided R-77 missiles. The second group of Bombers will only depart after the first group has been destroyed. Once all your targets have been neutralised you may either return to the Boat or land to complete the mission at Qeshm Island. The Silkworms are positioned on Coastal locations of each Island & pose a great threat to our Ship. The Bombers are substantially more of a lethal threat & take note..  they will deliver their payloads approx 9 mins from their departure times & of course as mentioned you also need to splash the J-11A Fighter as well. There is also a small enemy Camp at Sirri Island that has aquired some large fuel supplies. This camp is NOT part of your Mission objectives but if you have a spare Rockeye, you have the green light to blow their reserves. Finally, our Abe Lincoln has formidable air defences & can take down incomming missiles but he is not impenetrable & if damaged in any way from the enemy you will fail the mission. You are the designated.. Fleet Defender!
Good luck Pilot!
TIPS:
1. After destroying the first two Radar units. advise a refuel from Texaco Tanker in the area or at Qeshm Island ( green smoke marker wh ere to refuel ) then once you take out the final Radar unit expect the Bombers to become active from Bandar Abbas & when you nail them the J-11A Fighter departs Lar Airbase.
2. Prior to departure, wait & use one of the Waist Cats 3 or 4 so you can depart without flying directly into the sun.
3. Try & keep away frrom the Bomber's Six.. they'll just spray the living crap out of you with their deadly gun.
4. Don't stray too close to Bandar Abbas as there is a SAM SA-2 Fan Song active there.
Tags: JSOW 154C, AMRAAM 120C, SIDEWINDER AIM-9X, SPARROW 7-M, Persian Gulf Map, Supercarrier, HORNET F/A-18C, ROCKEYE Mk-20, SAM SA-2 Fan Song
FOLLOW US