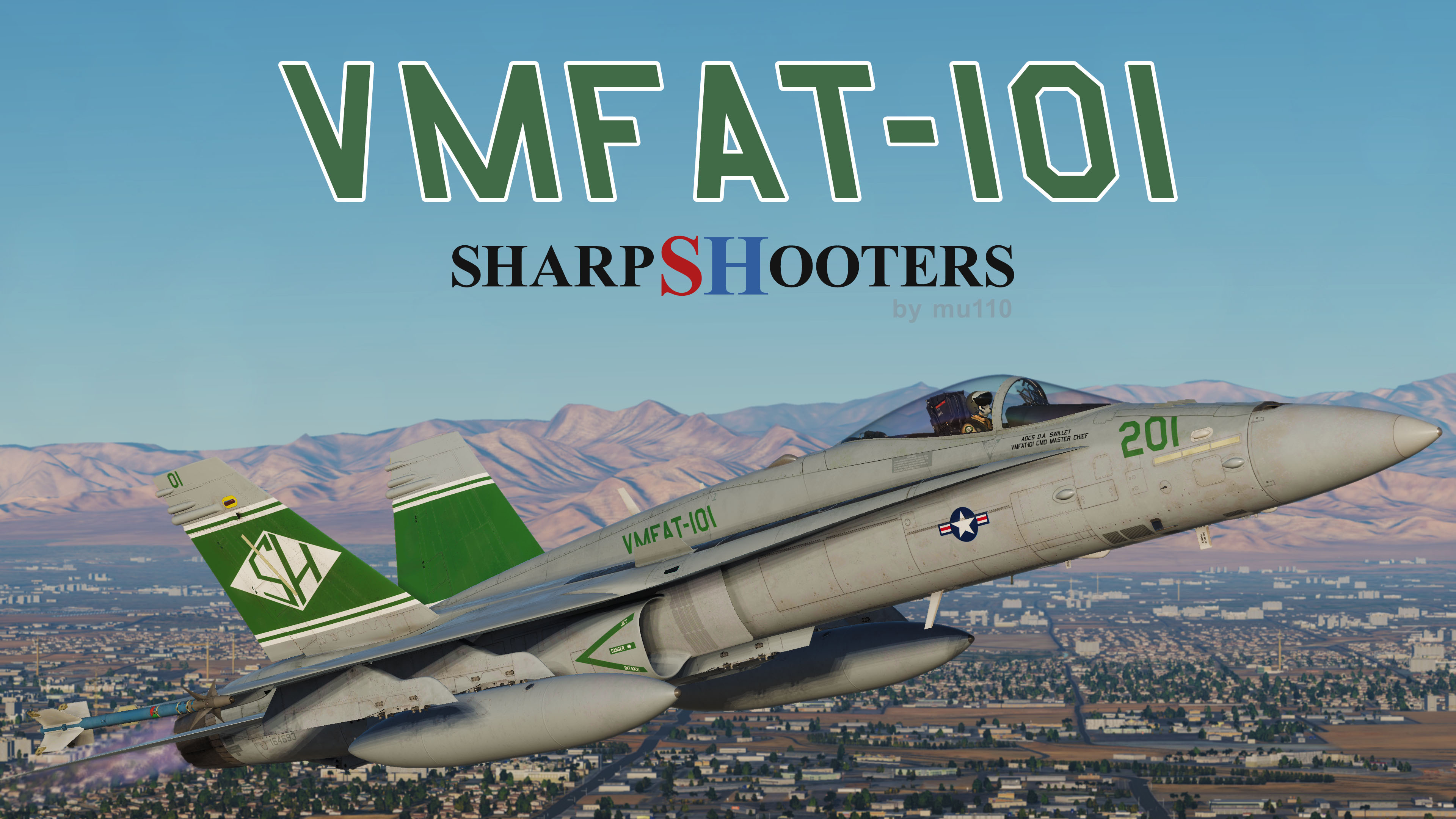 Each one has been photo referenced and includes a number of pieces of vector drawn squadron art and numerous other details to recreate these aircraft in as high fidelity as possible. Every aircraft livery also displays the correct BuNo (including inside the cockpit). However, some of the aircraft represented are A, not C model Hornets, so this pack should be considered semi-historical.

These skins represent an aggressor camouflage pattern seen during 2005 Carrier Qualifications, a 2012 livery in tribute to Marine Aviation Logistics Squadron 11 "Devilfish" which supports VMFAT-101 and the rest of Marine Air Group 11, and also the 2014 CAG bird.

As VMFAT-101 conducts strike fighter training for both Navy and Marine Corps students, the squadron typically flies with dual Navy/Marines markings which are present on these liveries as well. Each skin also includes the correct pilot names stenciled by the canopy, as well as custom helmets, patches, and flight suits. All credit for the green helmet textures used for the CAG pilot goes to Texac: http://www.digitalcombatsimulator.com/en/files/?CREATED_BY=TheNikPlay&set_filter=Y

Also provided for the CAG skin is an alternate high visibility fuel tank design featuring the Sharpshooters logo. If you wish to use this one, simply go into the livery's folder and swap the [ALTERNATE] in the filename from one fuel tank texture file to the other.

Each of the liveries uses a custom roughmet fix that gets rid of the ugly pylon shadows baked into the default textures. You can download this fix standalone if you wish to apply it to all your other Hornet textures.
http://www.digitalcombatsimulator.com/en/files/3305954

INSTALLATION: Copy the three different livery folders included in the download into [YOUR DCS INSTALL]/CoreMods/aircraft/FA-18C/Liveries/FA-18C_hornet folder.
These skins are available for the US faction in game, the Aggressor skin can also be used by the US Aggressors.

You can find the forum thread for this pack here: http://forums.eagle.ru/showthread.php?p=4003267
Please let me know if you find any errors with the skin or find something else that could be improved. Enjoy!
Tags: vmfat-101, sharpshooters, f/a-18c, aggressor
FOLLOW US