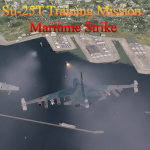 Type - Single mission
Author - DarkFire
This is a practice mission in which your task is to attack and sink several ships, some at anchor and some moving, using laser and optically guided weapons.

Your task in this mission is to attack and sink two groups of ships in a harbour. The first group of 5 ships are all at anchor whereas the second group of 2 ships are under way. Practice using electro-optically and laser guided missiles against these maritime targets.

You have a wingman which you are likely to have to use, given the number of guided missiles necessary to sink most medium sized ships.

If you have any questions, queries or constructive criticism by all means please leave a comment below or email me at Sir.Wulfrick@gmail.com
Tags: Su-25T, training, maritime, ship strike
FOLLOW US