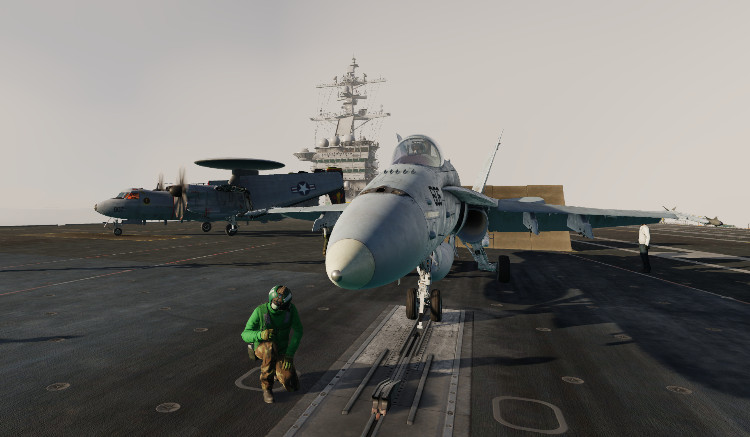 Typ - Einzelspielermission
Hochgeladen von - p.king
You are UZI flight taking off from the Supercarrier CVN 73 and eventually landing on CVN 71. This is a goodwill mission that will also help you hone your low vis approaches due to scattered sea fog.
Land at all the airports marked as waypoints in your nav computer. See F10 Menu for waypoint definition and runway bearing/course.
Nicosia airbase is closed and should be a touch and go only. Pinarbashi runway is very short, so dump fuel down to 3600 lbs before approach.
After Pinarbashi you may need to rendezvous with tanker (Arco 1 - 1).

Note that the situation in Idlib province is tense with the Turkish military threatening to shoot down any Russian or Syrian jets that attack its allies on the ground.
(can be flown with one other in multiplayer)

Take control of UZI flight and undertake a goodwill visit to each of the Cypriot airbases/airports pre-programmed in your flight computer. After visiting Gazipaşa you are invited to fly the Vahshi Sooroosh (Wild Ride). This is the Turkish equivalent of the Mach loop in the UK or Star wars canyon in the US. There is a target range in the middle of the lake half way through the route. Then you can visit Incirlik before embarking on CVN71.
Again, please take note that the situation in Idlib province is tense with the Turkish military threatening to shoot down any Russian or Syrian jets that attack its allies on the ground. The Sea fog is causing some pilots real problems! Colt Flight can be used as reserve.