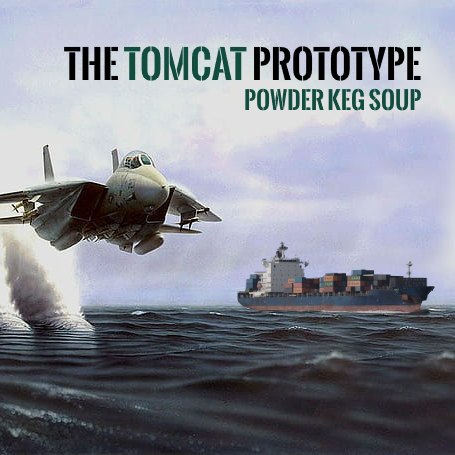 类型 - 单机任务
作者 - winghunter
This is an adaptation of Frag's great mission "Powder Keg Soup" for the F-14 Tomcat
https://www.digitalcombatsimulator.com/en/files/3316729


As a pilot of the USN Tomcat F-14A+ (B) Prototype Evaluation Program, you are secretly tasked to sink 2 Chinese cargo ships in the Lebanese territorial waters on behalf of the IAF.

This mission is fully voiced (dozens of recording), has custom music and automated radio. I would consider the difficulty to be low to medium (optional goals). To complete it, you need to know the following:

3. Use of dumb bombs and gun

Shortly after the Lebanon war of 1982, the dust slowly settles between Lebanon and Israel. However, the middle east is more divided than ever and dozens of insurgent groups fight each other in search of power.

Syria becomes a nest for insurgent groups, becoming the haven of weapon smugglers and extremists. On May 6th 1985, Mossad is getting tipped off about a huge shipment of thousands of Chinese AK-47 and RPGs heading for Syria thru the Bassel Al-Assad port. These smuggled weapons will be sold to the various insurgent groups, representing a serious threat in the area.

The cargo ships smuggling the weapons, named Sheunsh an Awhan, are currently crossing the Lebanese territorial water, heading to the Bassel Al-Assad port in Syria. The Israel military demanded access to the Lebanon airspace to sink these ships, which are a threat to security of both countries. Since Lebanon has no air force and would rather let Israel take the political heat for destroying Chinese ships, it temporarily granted the Israeli air force access to their airspace.

You are part of the US Navy secret evaluation program for the new F-14A+ (later called B) Tomcat prototype, currently evaluating performance in the middle-east theater. Since the Israeli airforce only has F-16 toys at their disposal, and since the Tomcat prototype has superior speed and bombing capabilities, we were asked to execute this mission. It will be a great opportunity to show the advancements of the B model. But this needs to remain a secret, so you will pose as an IAF F-16 towards air control and stay out of sight from any friendly and enemy flights! Hide in the clouds as much as possible. To confuse onlookers, your Tomcat is visually disguised as a MiG 29. To further disguise as MiG 29, keep your wing sweep manual at 30° below 5,000 feet, during takeoff, landing and bombing. And spoilers OFF.