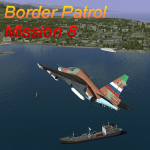 类型 - 单机任务
作者 - DarkFire
The 8th mission in my "Border Patrol" series. In this mission you are once again in the cockpit of the Su-25T carrying out a complex anti-ship mission. This mission has a LOT going on and plenty to see while the autopilot flies you between waypoints.

Questions, comments, queries, complaints about the frame rate? Please email me at Sir.Wulfrick@Gmail.com

MISSION BRIEFING:
=============
Our advance in to Georgia continues. The 244th Motor Rifle Division has taken Babushara airfield and has captured Gali. Our ground troops intend to advance further to the south east this morning. Their next phase of operations will be to cross the river and take Zugdidi.

Georgian resistance continues to be more effective than predicted. Theatre HQ at Krasnodar tasked intelligence and reconnaissance assets with establishing why enemy resistance has been so strong.

We have been aware since the start of this campaign that the Georgians were being supplied with equipment by the Ukraine. The Kuznetsov battlegroup managed to stop ferry mission across the Black Sea by Ukrainian aircraft some days ago, however this did not appear to have reduced the rate at which Georgian munitions and ground vehicles were being replaced.

Photographic reconnaissance by Yastreb drones over the past two nights has revealed that the Ukrainians have established a maritime resuply route around the western and southern areas of the Black Sea, out of range of our maritime patrols.

An opportunity has arisen to prevent any further resupply shipments. The 339th Frontal Aviation Regiment has been forward-deployed to Babushara and Theatre Command at Krasnodar have tasked us with a strike sortie today.
标签: Su-25T, Border Patrol
关注我们